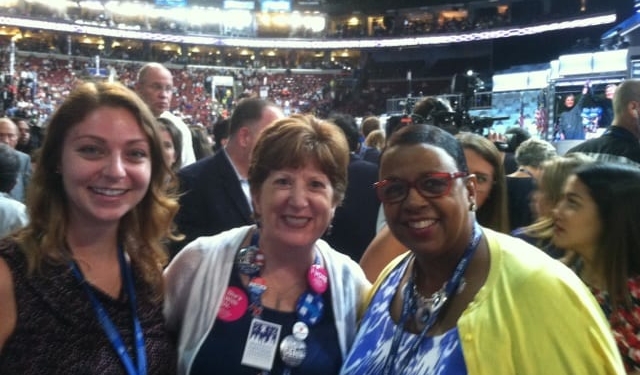 PHILADELPHIA, Penn. — A full contingent of Albany County Democratic leaders are in Philadelphia this week, representing the region in the Presidential-selection nominating process.

Led by Congressman Paul Tonko, County Executive Dan McCoy and Albany Mayor Kathy Sheehan, the locals were hosted through the Democratic National Convention by what is recognized as a well-orchestrated event for some 25,000 delegates, activists, party supporters and guests. Other delegates joining the three regional elected officials include Assemblywoman Carrie Woerner, Daniel Donahue, Josephine Moore and Thomas Wade.

Despite discord marked by protests from some of the Bernie Sanders supporters both in and outside of the arena, Sanders’ agreement to throw his support to Clinton  Wednesday during the formal roll-call delivering the nomination to Hillary Clinton was welcomed by the Albany area delegates. Said Sheehan, “Hillary Clinton will certainly be a solid leader for the Upstate New York Region and the Capital District in particular. She knows our area from serving as U.S. Senator and has always been accessible for Albany’s elected officials, both Democratic and Republicans alike”.

Albany City Council President Carolyn McLaughlin noted that she worked closely with Clinton during her tenure on the Albany City Council, where the Clinton staff and the Senator herself were engaged with matters key to the local community during the eight years Clinton served as New York state’s Junior Senator.

What’s happening around The 518 for Thursday, July 28