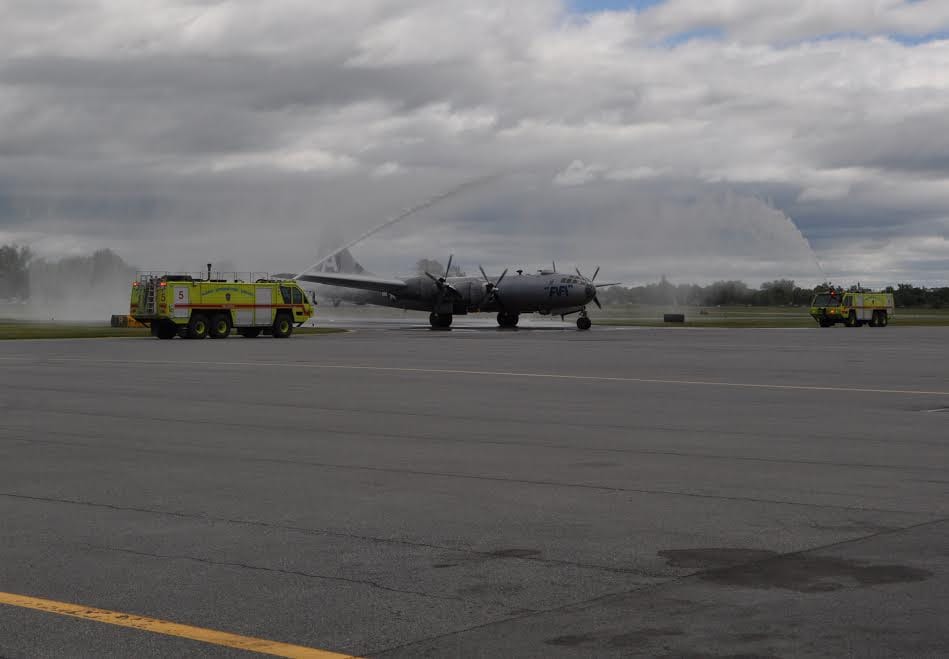 ALBANY COUNTY – The Commemorative Air Force’s (CAF) iconic Boeing B-29 Superfortress bomber, FIFI, landed at Albany International Airport on the afternoon of Monday, June 13, accompanied by the C-45 Expeditor, Bucket of Bolts. During their stay in Albany, the public will have the opportunity to see the airplanes up close and purchase rides in them.

FIFI’s 2015 visit to Albany was cut short due to weather and maintenance issues; tour planners included it on this year’s schedule because of the overwhelming response the airplane received during its abbreviated visit.

The Boeing B-29 Superfortress, which was first flown in 1942, began active service in 1944 and is best known as the aircraft whose missions over Japan helped bring about the end of World War II. It was designed as a replacement for older B-17s and B-24s, and was equipped with longer range and greater bomb loads. The B-29 was also used in the Korean War in the early 1950s and was a staple of the U.S. Air Force until late that decade.

FIFI was acquired by the CAF in the early 1970s when a group of CAF members found her at the U.S. Navy Proving Ground at China Lake, California where she was going to be used as a missile target. The airplane was rescued and restored and flew for over thirty years, until 2006 when the chief pilot made the decision to ground her pending a complete power plant re-fit. What followed was an extensive four-year restoration that included all new custom-built hybrid engines. FIFI returned to the sky in 2010. (More information about FIFI and her tour schedule can be found at www.AirPowerTour.org.)

The Commemorative Air Force is a non-profit educational association dedicated to honoring the men and women who built, maintained and flew in these airplanes during World War II. The organization believes that is best accomplished by maintaining the airplanes in flying condition and taking them to the public, allowing people to experience the sight and sound of the aircraft in flight.

Collecting, restoring and flying vintage historical aircraft for more than 50 years, the CAF is one of the largest private air forces in the world, with more than 13,000 members and a fleet of over 165 airplanes being cared for and operated throughout the country at 79 units located in 25 states. (For more information, visit www.commemorativeairforce.org.)

The public events will be staged at the airport’s Million Air facility at 16 Jetway Drive in Albany, and will be open to the public Wednesday, June 15 through Sunday June 19 from 9:00 a.m. to 5:00 p.m. Admission to the ramp is $10 for adults and $5 for children age 11-17. Children age 10 and under are free. Ride reservations can be made at www.AirPowerTour.org.

Promo video: If These Planes Could Talk

BHS seniors “prank” for peace | In the wake of the worst mass shooting the country has ever seen, local seniors use an annual tradition to promote peace