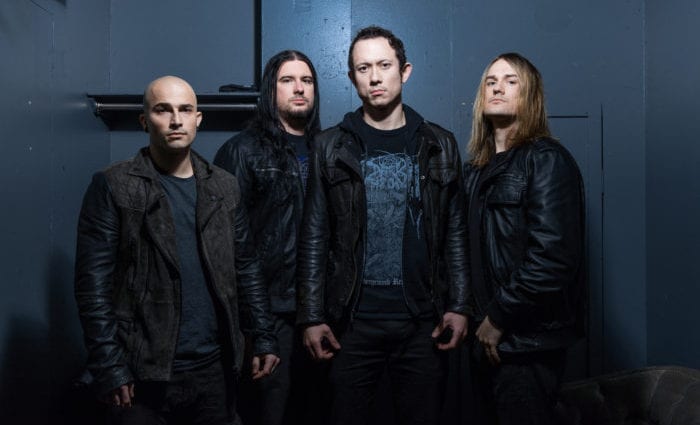 SCHAGHTICOKE — Labels are just as unpopular with artists as they are with anyone else. No one wants to be pigeonholed by another person’s perception. Especially when it’s wrong.

Trivium is metal. Heavy metal? Yes. Hard rock? Certainly. In the binomial nomenclature of music, metal has many subgenus categories to describe sound. Just try to stay away from using metalcore with Trivium.

Corey Beauileu has been the band’s lead guitarist for more than a decade. Next to his attributes is “unclean vocals.” It’s a tip of the hat to metalcore, into which Trivium delved when they first started out. The “unclean” adjective best describes metalcore, which is characterized by common grunting and growling of lyrics. You may be left to question what is being said, but certainly not the power in which it’s being said.

Since signing with Roadrunner Records in 2004, Trivium has released seven studio albums. As Beauileu tells us, each album is different. Those holding their breath for more unclean vocals are in trouble. The band’s sound is more dynamic than that.

MH: Taking a look at your schedule, you guys are hitting the road hard on this tour. I figure that’s the norm, but it just seems cruel!

CB: “Yeah. We usually play five times a week. Most of these shows, we’re playing a lot of festivals, so set times are a little shorter since it’s not a headlining show, or anything. It’s not as grueling when you don’t have to play for a super long amount of time. But, it’s been fun so far.

MH: I bet. For me, it seems you guys are equivalent to athletes, with how you have to perform on stage. Is there anything you have to do to prepare yourself, both mentally and physically?

CB: “Our live shows are a little bit on the physical side, all of us, definitely on a tour, there’s a lot of stretching out and things like that. We just get physically loosened up to play. In some ways it’s like getting prepared for a sporting event, and to make sure you don’t pull something while you’re playing. On tour, everyone works out, has a routine for getting ready for a show — definitely put a lot of prep time into performing.”

MH: As far as material, you just released an album last year but you guys churn out an album every two years or so. You guys working on anything new?

CB: “You know, we’re always writing during our down time. We don’t really write that much anymore [while we’re] on tour. Maybe if we just get an idea or something, but a lot of the stuff that we write nowadays is when we have breaks at home. Usually somebody writes a song, or at least gets an idea down. We don’t wait till we have to start writing a record. We’re just constantly writing, all the time, because it’s just something we like to do. So, we have a lot of material already. Once we start thinking about a record we’ll dive through it all and figure out what in the pile is what we’re looking to do for the direction of the record. Hopefully, we’re thinking about a record sometime next year. I think we’ll be in the timeframe for that.”

MH: The band has been around since 2000 or so. It’s only natural for the band to have an evolving and changing sound. Now, one of the labels attributed to the band has been “metalcore.” It’s a genre defined by how some of the vocals are delivered in more of a growl and it almost serves another purpose. Does that make sense?

CB: “We’ve had the screaming element, sound, from the beginning. We’ve kind of grown. We have a broad sound. We really like the melodic side of things, and we can go to aggressive, the heavier side of metal. We’ve always had both elements, and then we’ve just used them in different ways. It’s given us a variety of different songs and not being stuck with having to use screaming all the time. We’re able to sing as well. For us, the metal core thing was kinda the big label when we first came out, because the scream-sing thing was popular for that point and time. Over time, we’ve expanded our sound and done a lot of different things, so that label doesn’t really fit us for a style of metal. We just say we’re metal because we bring so many different elements of metal and rock in general. The screaming thing, we just use when ever a song calls for it, where the part just really needs it. But, we don’t really use it all the time. So, it’s definitely something of a tool in the tool kit. It’s not something that overall defines what we do.”

MH: Definitely not. But, when you have hardcore fans who witness this change, sometimes you get fans who really dig it, and some not so much. When you go through such a change, are you conscious of how the fans will react? Are you even conscious of the change as it is occurring, or is it something that just naturally happens?

CB: “Every record is just very natural. Even from the beginning, before we even have songs — When we made our first record, we were just making music as music fans. We were playing what we wanted to play. That’s how we approach every record, because nobody hears music until it’s done and put out. So, you don’t really get, ‘Hey, what do you guys think of this?’ So, we’re just playing what we feel inspired to play. Sometimes, we do screaming. Sometimes it’s not. We do what we feel the song needs.  You know, obviously with every album we put out, it’s been slightly different than the one before it. You’re always going to get some people who want you to do the same thing over and over again. But, that’s not what we’re all about as musicians. We’re always trying to move forward and try new things, expand our horizons. With every album you’re guaranteed fans with expectations of what they think the record is going to be, and not be what it is, and be bummed and say something bad about it. We always think records need time. Every record that we put out, when you give it five or six months, their opinions change because they actually listen to it. They adjust and appreciate what you’re doing for that record. Every record has had its moments where there’s been resistance. But, those records over time turn out to be some of people’s favorite albums.”

MH: After all these years, do you still get a charge out of that feeling, of fans connecting to what it is you’re trying to do?

CB: “I think we’ve put out so many records and gone through it so many times, you kind of expect to get it. Like, a normal thing. So, it’s not so much of a surprise anymore. Yep, there’s going to be those people who love it. There’s going to be people who don’t like it. There’s going to be people that are going to need time to really let it sink in. It’s kind of a normal thing with every release. And, with social media, everyone has a chance to scream their opinion and make it heard. I’m sure even back in the day before social media and the Internet, there’s probably the same amount or percentage of people that did that for every record, they just didn’t have such an interesting platform like social media to make it known. But, we’re used to it. It’s no big thing.”

CB: “Yeah, Rock on the Range is, I guess, the Mecca of all these rock festivals. The big one. The Super Bowl of rock festivals. It’s kinda been the one [that]spawned all the other ones from the success of Rock on the Range. It’s pretty much like everyone, all the radio stations from across the country, everyone that you can think of in the music industry mobs to that festival. It’s the big one that everyone goes to. It’s a real big show. It’s amazing to see how many people, when you see in the news that rock is dead. When you go to Rock on the Range, you get a totally new thought of that. It’s amazing how many people from around the country travel to go to that festival. You know, it’s like everyone is there. You can really make a big impression if you’ve got a new record out, or if you’re a new band, you can put on a great show. There is so much media, and so many people who are big in the business that are there. It’s a huge event, so it’s always fun to be a part of it. Especially being in a band and touring over the years, you meet a lot of bands that you’re friends with and meet a lot of acquaintances through the industry. You go there, it’s a really fun time with everyone else that’s there. Great bands and experience a lot of cool things. People want to see a massive rock show and really go to something that has a great vibe. People want to travel to and want to experience in a really killer festival. They want to definitely check it out.”

MH: But, when you look at a festival like that — the model of which is very popular in Europe — I get the impression rock isn’t dead. In fact it’s picking up in popularity.

CB: “The thing about the festivals over in Europe, the festivals were always on a Friday, Saturday and Sunday. So, you have a festival centralized in one city, it would be on location for a three-day event. It was really cool, because we’ve done those in Europe for years, before it popped up in America. And, America was always the summer tour, like Ozzfest or Mayhem, where it was a traveling festival, playing five times a week. And, I think the European model on the weekend works better, because people can get the weekend off, maybe go to the festival for Saturday and Sunday. I think it’s better for more people when it’s not a festival on a Tuesday or a Wednesday, when more people have to work. So, I think the weekend thing, makes more sense because more people can come out. In three days, each day’s a totally different line-up. You can see a lot of people and have a fun weekend. It makes it more of an event when it’s a centralized location. There’s so many people who I’ve talked to over the years.  Certain festivals have become — in each city, every year — becomes a named festival for being something cool to go to. I know a lot of people who will travel from different places in the country to Rock on the Range or Welcome to Rockville in Jacksonville — these destination locations, you can make a vacation out of it. It’s really cool to see so many rock fans from playing in Jacksonville, so many people from neighboring cities and towns, flocking to this event to see hard rock and heavy metal music. It’s a really cool thing to see become so popular in America. Every year there’s more festivals popping up, like the Rock ’n Derby just kinda popped up, but it goes to show you there’s a demand for rock music all over the country.”

Two New Yorkers missed their turn for a birthday party, only to take their turn at becoming heroes

Jean-Paul Gaster of Clutch talks to TheSpot518 about Lemmy, the music industry and more