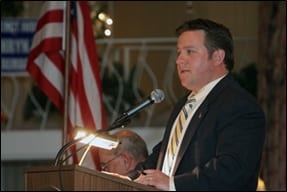 County Executive Dan McCoy signed a law that would increase the tobacco buying age from 18 to 21 in Albany County. Ali Hibbs/Spotlight

ALBANY COUNTY — Albany County Executive Dan McCoy gave his State of the County address this Tuesday, Feb. 1, in the Cahill Room of the Harold L. Joyce County Office Building on State Street in Albany, following an invocation by Father James Lefebvre of St. Mary’s Church in Albany and a rendition of the national anthem sung by Colonie Central High School student Katera Edwards.

McCoy began the annual address by touting his record as county executive. “I promised that we would stabilize county finances; make our county safer and more secure; make the delivery of critical county services—to our seniors, to our youth, to our veterans, and to those who are disadvantaged more effective and more efficient; and I promised we would do all of these things without placing any undue burden on the real property tax payers of our county,” he said. “Tonight, I am pleased to again deliver a State of the County message that clearly demonstrates that I have kept each of those promises.”

For two consecutive years, he said, the county has not raised taxes and, for the last three, has remained under the state tax cap. He credited increased efficiency and county reforms with improving county finances and said that the current fund balance of more than $40 million is the highest in recent memory. Fair contract negotiations with county employees and restructuring of the Albany County Nursing Home are two areas that McCoy said were “key” to achieving a countywide “financial turnaround.”

Next, McCoy discussed economic development within the county, saying that the new convention center and upgrades to the existing Times Union Center will bring job growth, economic development opportunities and sales tax revenue to the county, and pointed out that the Al Tech Loan Fund, administered by the Capital Region Chamber of Commerce, approved more than $4.2 million in loans in 2015, resulting in the creation or retention of more than 275 jobs. Additionally, in its first year of operation, the Albany County Land Bank acquired 123 properties in 2015 sold seven, demolished seven, began five full rehab and is working on 17 more. Congratulating land bank officials on a successful year, McCoy announced the commitment of another $500,000 in the 2016-2017 fiscal budget.

After discussing steps that the county is taking to improve veteran services, McCoy began speaking about the opiate epidemic that is sweeping the country. “We need to do more to educate our children and teens on the danger of opioid use,” he said. “And provide help to individuals and families dealing with the crisis.”

McCoy highlighted his three-prong approach to addressing the opiate issue, “Action, Awareness & Progress,” and said that he created an Opioid Task Force, charged with outreach and education in communities and school districts.  The county has also been providing extra training for county officials most often touched by the opiate epidemic, as well as Narcan classes for the general public, and is organizing an informational summit for this spring.

“But tonight, I have an important announcement,” said McCoy. “At my request, Albany County Department of Health Commissioner Dr. Elizabeth Whalen will issue a standing order that Naloxone will be available without a prescription at participating pharmacies in Albany County. Now, family members and friends of those who are struggling with opioid addiction have the power to buy this lifesaving medication at their neighborhood pharmacy . . . While we now become one of only a few places in the nation to take such action, it is our hope that other counties will follow our lead as well as the recommendation of the American Medical Association that Naloxone be available for purchase in pharmacies without a prescription.”

McCoy went on to commend the Albany County Department of Mental Health for being recognized as a “Community Champion” by local health care leaders and strengthening its relationship with the Albany Police Department, which is then discussed plans to create a “Mental Health Court” in Albany County. “The development of a Mental Health Court in Albany County will go a long way towards addressing the growing 21st century national problem of our local jails becoming de facto psychiatric hospitals,” he said. “The goal will be to create a therapeutic pathway through the criminal justice system for eligible individuals living with serious mental illness so that they can get the treatment they need without unnecessary incarceration; and, will be modeled after the success of drug courts in Albany County.”

After reiterating his commitment to environmental issues and public safety, specifically mentioning the work he has done to curb the flow of combustible fuels through the Port of Albany and the new County Recreation Bureau, McCoy highlighted children’s services provided by the county and went on to say that Albany County Department of Children, Youth and Families will be partnering with the county probation system in implementing a “Juvenile Detention Alternatives Initiative,” intended to “decrease the number of youth unnecessarily or inappropriately detained in the justice process and to reduce the disproportionate minority confinement in that system.”

“I began this State of the County message by stating that, over the past four years, my administration has worked hard to protect the health, safety and welfare of the residents of this County. And, tonight I’ve offered significant tangible evidence of what we have accomplished and our record of success,” said McCoy. “But there is much more work to be done. We need to insure that all of our residents have full and equal access to opportunities that enable them to attain their full potential. We need to embrace and to promote a true Equity Agenda in the development and delivery of all county services, so as to more effectively serve those left behind due to race, poverty, age or disability.”

To that end, he said, he has asked the Center for Human Services Research at the University at Albany to “look at our county departments to assess how we can develop a new paradigm and use our policies and programs to improve access and opportunity for all our residents, particularly those groups who have long been left behind. We will look at how we can best deliver county services through the prism of an Equity Agenda so as to best deal with issues of poverty, inequality, racism, discrimination and social and environmental justice.”

County Executive McCoy concluded his address with a quote by Dr. Martin Luther King, ““we are all tied together in the single garment of destiny, caught in an inescapable network of mutuality. And whatever affects one directly, affects all indirectly.”

EDITORIAL: Transparency a must