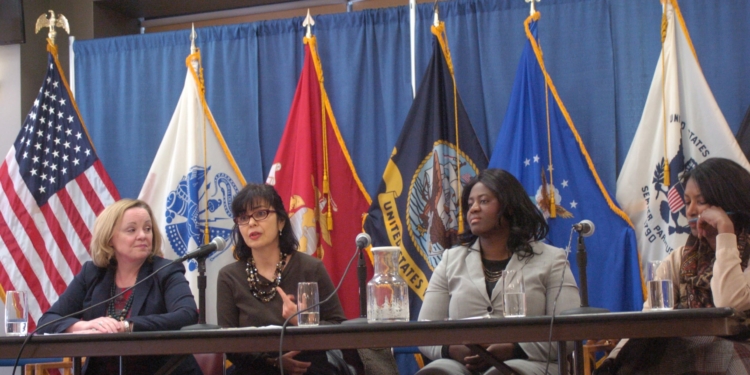 ALBANY COUNTY — A “lunch-and-learn,” the second of four county-hosted events honoring African American History Month, was held in the Cahill Room at the Harold L. Joyce County Office Building at noon on Thursday, Feb. 18. During the event, a panel of health care experts spoke on health issues facing contemporary African American communities and the discussion quickly turned to a state-wide initiative meant to dramatically transform the way that health care is delivered to Medicaid recipients and, more specifically, to those in high-risk communities.

Annabella Roig, one of the four female panelists, says that she came to work in the Capital District a little more than a year ago because New York is one of only 11 states in the nation to have implemented the initiative offered through the Affordable Care Act. The “Delivery System Reform Incentive Payment” program, or DSRIP, provides states with funding to explore ways to improve care and overall patient health while reducing costs within the Medicaid system.  Talking about “value-based” care, integration of services and quantifiable health outcomes, Roig — who is now the Capital Region Director of Health Planning for New York State Department of Health —said, “This whole conversation is happening in New York, and I’m happy to be here.”

Roig and the other panelists — Albany County Department of Health Commissioner Dr. Elizabeth Whalen, MPH with the NYS Department of Health AIDS Institute Heidi Iyok, and Director of Behavioral Science / Director of Research for Dept of Family and Community Medicine at Albany Medical Center Angela Antonikowski also discussed issues such as: access to health services and nutritional foods; the health of living environments such as homes, schools and communities; the stigmatization of mental health; and the prevention of chronic diseases. The answer to many of these concerns, all four panelists seemed to agree, begins with the implementation of coordinated care and the empowerment of individual patients to communicate with their providers and understand how to competently navigate a complicated system. Successful Medicaid reform could potentially have wide-reaching effects on how care is delivered across all patient populations—not only to those receiving Medicaid benefits.

“We have a very complex system of care,” said Whalen. “It is what is it is.” That being said, Whalen touted the “comprehensive” Medicaid benefits offered by New York State and said that these would not be lost under the redesign. All of the panelists, in fact, stressed that the onus is primarily on DSRIP health care providers to produce results—i.e., healthier patients with fewer return and emergency visits.  A lot of the DSRIP- funded programs, according to Whalen, are focused on simplifying and clarifying the process for Medicaid recipients in the hopes that they will be more likely to take advantage of available primary care and preventative services that keep the patient healthier and reduce expensive emergency department visits. “We know that there are a lot of Medicaid patients who inappropriately use the emergency department. In a lot of cases, it’s because that’s where they’re used to getting medical care,” said Whalen. “Really, it’s not the best place to get medical care.

“That’s where the physicians and the practices and the hospitals are going to have their feet to the fire,” she said. “Because they’re only going to get this money if they deliver the results. So, they have to make a difference. It’s a five-year strategy; it is very comprehensive, challenging and revolutionary, but it is a fantastic opportunity and it is one that everyone should be aware of. It really does, at the end of the day, have that potential to equalize health care across populations, and this is something that all of us in public health have been trying to do.”

One aspect of the DSRIP initiative is a shift from a fee-for-service model of health care—where a patient sees a doctor who performs a service, pays them for that service and that’s where the interaction ends—to a managed care system, one in which a primary care physician is aware of and coordinates all other aspects of a patient’s health care needs, from chronic health problems to mental health, preventative strategies, access to nutrition and any other relevant determinants of health.

“The kids need to be identified earlier,” said County Legislator Lucille McKnight (D-1) of children who may present early symptoms of behavioral or developmental health issues. “This is one of the biggest problems in our urban communities with African American kids . . . These kids need to be identified, who come from broken or addicted, alcoholic homes and are not getting into these programs before the age of 5.”

Antonikowski, in one of her roles at Albany Medical Center (AMC), trains residents to identify behavioral health needs in patients who may come in presenting with only physical symptoms. She said that during her 16 years in Albany, she has noticed a strong correlation between general health and mental health. One of the major problems in diagnosis, she said, is the stigmatization of certain health issues. “Sometimes,” she said, “it’s the sole factor in whether a person seeks treatment.” Whether it’s learning disabilities, developmental issues or mental health issues, Antonikowski said, “We have to start having frank, candid conversations about mental health in the same way we would about physical health. If we can start to have these conversation earlier, we can start to identify children much, much earlier.” One in five people on the planet suffer from some form of mental health issue, she pointed out. “Just know that it’s much more prevalent than we think.”

Iyok said that the problem she encounters most in minority communities is lack of access to health care services—not just an awareness that they exist, but also an understanding of why they might be beneficial. “You can have all these services, but if people don’t know that they’re there or know they’re there but aren’t sure why they should be accessing them, then you have this problem.”

Iyok and Whalen both spoke about efforts to implement “community health worker” programs, where members of the community are trained to serve as informational touchstones within that community, and are able to help neighboring residents navigate the system and direct them to beneficial services and providers. Antonikowski mentioned the possibility of training community leaders such as church officials or scout leaders to recognize potential issues and direct community members to the best place to receive help.

“I think the concept of how we empower people to feel like they’re the agent of their own health and of their family’s health,” said Whalen, “is what everyone is getting at . . . it’s a different conversation, and I think that learning to have that conversation can go a long way toward breaking down barriers of trust.

“These conversations need to take place,” she said. “Because if we have any kind of fear in the community that this is going to be something that is going to hurt our health or our health benefit, it’s not going to move forward.”

Albany County is home to two Performing Provider Systems (PPS) receiving DSRIP funding: Albany Medical Center and the Alliance for Better Health Care (Ellis Hospital, St. Peter’s and St. Mary’s). “They want to have these conversations,” said Whalen, who sits on committees for each PPS. “But because of the amount of planning that has to go on with the other million pieces of this, they have not effectively had these conversations yet. They are going to happen, I believe. The next step really has to be about these practical applications.”

“I think DSRIP has a good potential to improve health care in disadvantaged communities,” said Legislator Sam Fein (D-6), who attended the “lunch-and-learn” with McKnight and other fellow legislators Wanda Willingham (D-3) and Majority Leader Frank Commisso (D-11). “Although,” Fein continued, “it’s a complex process, and we will have to wait and see if the changes have the intended effect.”

The Sea The Sea is calling the Capital District home; now touring to promote second EP

It’s chilly out, and the kids are climbing the wall – What’s a parent to do?