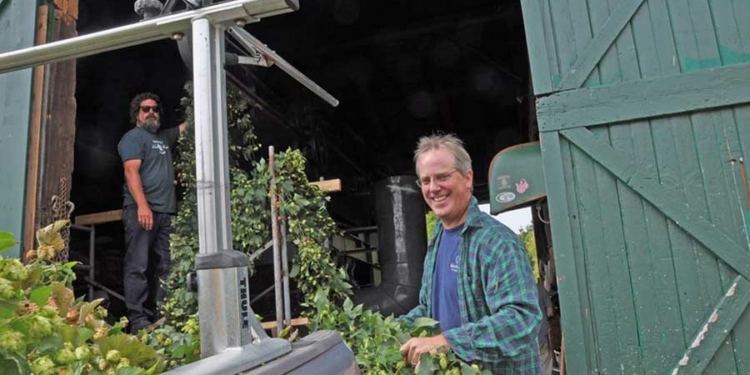 NEW SCOTLAND — Four years in preparation and growing have led to next week’s brewery and cidery unveiling.

Located at 342 Altamont Road in Altamont, in the re-purposed former gas station that houses the farm’s market, the new taproom will offer tastings and growlers for sale.

Two of the farm’s own ciders, made from Indian Ladder apples, and two of their own six varieties of beers, made seasonally to coincide with the farm’s harvests and made using ingredients sourced from the farm itself, will be served. Distribution of the cider has begun in a select number of restaurants and bars, while their beers will be sold exclusively on the farm.

The project comes from friends Stuart Morris, a wine distributor, who mentioned blueberry, pumpkin and strawberry as a few of their upcoming beers, and Dietrich Gehring. Gehring is an award-winning home brewer and husband of Laura Ten Eyck, the great-granddaughter of Peter Ten Eyck, who started the farm in 1915.

“We put the hops in about five years ago; then (the) farm brewery law was passed a few years ago, so it made sense to us. We already had the customer base, and it’s a younger customer base, so this adds another feature to the farm,” said Gehring, who also credited their part-time brewer, David VanHout.

This process, however, was not easy, as described in “The Hop Grower’s Handbook: The Essential Guide for Sustainable, Small-Scale Production for Home and Market” by Laura Ten Eyck and Dietrich Gehring.

“In the book, we talk about how we got into growing hops on Indian Ladder Farms and ended up starting the Indian Ladder Farmstead Brewery & Cidery, while providing a lot of information on the history of hops and how to grow and process them,” said Laura Ten Eyck.

After a series of bad crops left the project halted for its first two years and the process of extracting the hops from the vine turned out to be much more difficult than originally imagined, the team at Indian Ladder had to do some investing.

Just this past summer, the Ten Eycks purchased a mechanical harvester to extract hops from the vine. The year before, pickers had handpicked each hop, which took over an hour for each vine.

“There’s an expression among start-up hop growers outside of the commercial hop yards of the Northwest: ‘In the first couple years of growing hops, you and your friends can handpick all your hops, but in your third year you won’t have any friends left.’ (FYI due to circumstances beyond our control, we did end up calling on friends to hand harvest our crop in our third year of commercial production, and all these people are still are friends.),” wrote Dietrich in a blog he writes for the brewery and cidery.

Now, the brewery and cidery’s new Wolf 140 Hop Harvester — a mechanical hop-picking machine from Germany made in the 1970s — picks about 120 vines each hour. Graciously, the purchase has been shared with other local growers.

Two additional ciders and two additional beers from other New York breweries and ciderys will also be served. Ciders like Nine Pin — a locally made, sweeter hard cider — will be served alongside Indian Ladder Farmstead’s own dryer cider, served “farm to glass” style.

New York State brewery laws allow Indian Ladder to sell ciders and beers made under the same local brewing license in their tasting room. These laws also require 90 percent of ingredients be sourced in state, which of course was no problem for the Indian Ladder team.

“It’s spreading the wealth, but reinforces whole community. It’s nice having a variety besides what someone is selling. It’s the spirit of the whole farm brewery — it’s very cool to be pouring our brews next to the ones we respect,” described Morris.

“Our distribution will be purely cider in the beginning because I don’t think we’ll be able to make enough beer,” he said. “The real brewery will start this summer.”

“The brewery (is) really tiny, and the cidery is much larger. So, we’re trying to use the cidery to get the capital to launch with that, but we want to do both side by side,” said Gehring.

“There are some projections years and years ahead from now,” he said, when asked what he saw in the business’ future. For now, the focus is on the busyness of opening. “Our phone is ringing all the time. It’s best to pay attention to our social media — rather than calling — and we promise we’ll be better about updating.”

To learn more about Indian Ladder Farmstead Brewery and Cidery, visit their Facebook page or visit ilfcb.com for their blog.