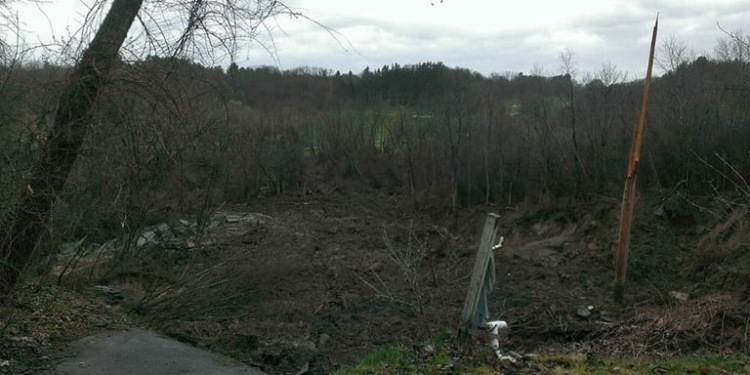 A mudslide has dammed up the Normans Kill, blocking water flow down the creek and resulting in a “high potential” for flooding, according to local officials.

Max Fischer, of McCormack Road North in Slingerlands, said he noticed the creek rising this morning. At first, he thought nothing of it as he saw the “blue” water.

He later walked towards the creek and noticed there was no brown discoloration, but there also was no current. The creek was also rising. “Then I said, ‘Gee, is there something going on down below?’” said Fischer.

Fischer arrived at the City of Albany’s Capital Hills golf course shortly before 1:30 p.m., with several police and workers already onsite. There he learned his fear of a landslide was reality.

According to Albany County Sheriff Craig Apple, an approximately “250-yard area of earth” slid down into the creek, entirely blocking it. “You are talking about a lot of earth that has shifted,” said Apple.

Albany County Executive Dan McCoy declared a State of Emergency for all areas bordering the Normans Kill countywide effective 12:30 p.m. until further notice. A “slop failure” on the Bethlehem side of the creek blocked water from flowing downstream. There is a high potential for flooding upstream from the landslide.

“All departments and agencies of Albany County are directed to take whatever steps necessary to protect life and property, public infrastructure and provide such emergency assistance deemed necessary,” the County Executive’s Office said in a statement.

Bethlehem Supervisor John Clarkson said town engineers were first on the scene and provided assistance to the City of Albany.

“The right experts are there … people who can help fix these things,” said Clarkson. “In the meantime, we’re getting ready should any additional emergency notification or evacuation be needed. There is none at this time, but we have time just to make sure we are ready.”

At a media conference held around 1:45 p.m., McCoy said the main concern is to get the creek running again.

“Our first concern is to get this creek open and stop the (potential flooding), but we have to do it in safe way,” said McCoy. “We have a lot of logistics, we have a lot of experts we need to bring in.”

Apple said workers are going to attempt to build a trench, or small ravine, to get the water flowing naturally, which will be a “very tedious” effort. If the water comes through too quick, it could cause flooding downstream.

There is no “immediate concern” of flooding this afternoon, according to Apple.

How long it will take to have water flowing downstream remains uncertain.

“We are talking days and weeks,” said Apple. “It’s really tough to put a timetable on it.”

McCoy said opening up the blockage “is one thing,” but to stabilize the creek they need to bring in equipment and clear out all the mud could take months.

Apple said a company is being brought in to verify the location of a 36-inch gas main running through the area. “We believe … it’s not in any danger at all,” said Apple.

Officials are also concerned equipment being brought to the site will sink. “You have to be careful if you open it up that the equipment could be taken away from the water rushing through,” said McCoy.

Apple said multiple agencies are working together to find a solution, including the state Department of Environmental Conservation and state Office of Emergency Management.

“It’s Normanside clay and it tends to have landslides,” said Clarkson. “We are very aware of it and cautious about it, but it does happen from time to time.”

Check back for more information on this developing story.