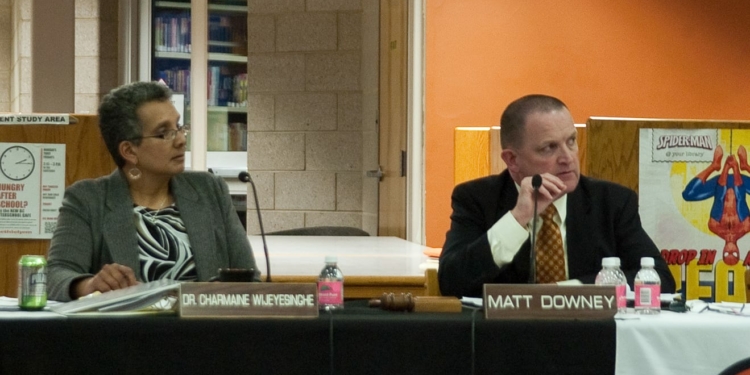 District administrators presented an updated 2015-16 proposed budget to the Bethlehem Board of Education at its Tuesday, March 31, meeting. After months of waiting to see how much state aid the district would receive, projections revealed Bethlehem Central would see an increase of nearly $2.3 million in state funding, totaling $25.98 million. The district’s maximum allowable property levy tax increase would be 0.45 percent, which yields around $287,000.

Board President Matt Downey contended the state aid increase was not a true increase, because “it’s just they’re not taking away as much as they have in the past years.” Gap Elimination Adjustment restoration of about $1.1 million provided a significant portion of the funding boost.

“We’re thankful for the support of our legislators in getting that money back to us and we look forward to hopefully full restoration next year,” said Downey.

Superintendent of Schools Thomas Douglas said state legislators have “promised” to completely eliminate the GEA next year. “We will need to hold legislators to that promise,” said Douglas.

According to the district, around $2 million next school year will be withheld from the Bethlehem Central through the GEA despite the restoration.

State aid figures were released hours before the March 31 meeting, which, unlike prior years, had been absent from the district’s budget development process. The clearer funding outlook provided “crucial” information school leaders needed to finalize a spending plan proposal, according to district Chief Business and Financial Officer Judi Kehoe.

“Without the preliminary aid runs we were forced, early on in our discussions, to make conservative estimates on aid we might expect,” said Kehoe. “Now the Board of Education is able to move forward with informed decision making and solid revenue estimates.”

School boards members generally did not appear to desire a property tax levy increase exceeding its threshold of a 0.45 percent increase. District administrators will be preparing a variety of budget scenarios for the school board to review, including going below the maximum increase.

Staying within its tax cap would not include drastically cut programming, according to preliminary proposal, along with reducing the district’s fund balance allocation.

“For the first time in recent memory, I can say we are in a position to begin rebuilding our educational program rather than reducing it,” said Douglas. “It may not be the bright light at the end of the tunnel, but at least we are headed toward the light and no longer away from it.”

Health insurance spending is slated to decrease around $400,000 next school year, totaling almost $11.1 million. The Teachers Retirement System pension rate also is increasing less than prior years at 13.26 percent; past years have seen rates around 17 percent.

Staffing districtwide has decreased 18 percent since the 2009-10 school year, while enrollment has decreased 7 percent, according to Douglas. Next year’s budget is eyed to help restore some of the reductions from prior years.

School board members could vote on adopting a 2015-16 budget at its next meeting Wednesday, April 15, or the following meeting on Tuesday, April 21. School district residents will vote on the proposed budget Tuesday, May 19.