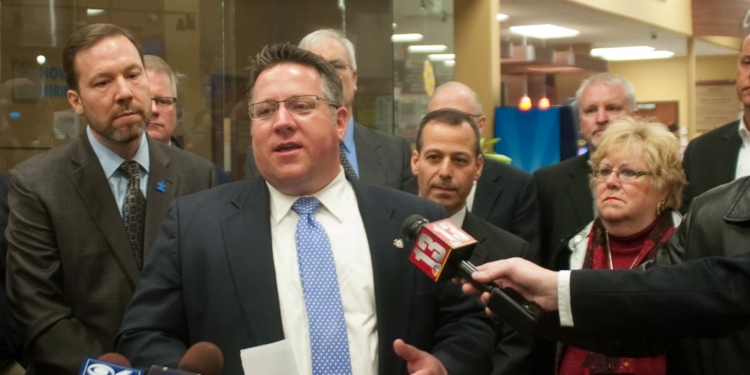 Albany County lawmakers pending decision to ban the display of tobacco products at local retail stores is apparently a moot point, because several major companies are self-imposing the restriction.

County Executive Dan McCoy and Legislator Mary Lou Connolly, flanked by supermarket and pharmacy store representatives, announced a local law prohibiting the display of tobacco in retail establishments with a pharmacy. The proposal was unveiled Friday, April 3, at the ShopRite store in Slingerlands. Connolly, D-Guilderland, is sponsoring the bill in the legislature.

McCoy, who vetoed legislation banning tobacco sales in such stores, described the bill as a compromise that would avoid legal challenges. The new legislation was drafted in partnership with affected retailers, who will voluntarily begin imposing the regulation.

“They volunteered … to do what’s right, but still provide a legal product,” said McCoy, D-Albany. “This is about protecting all people of Albany County, but also giving the convenience when they go out and shop.”

Connolly said it’s “wonderful” the retailers were complying with the proposed law “without a battle.” She hoped fellow legislators would join her in sponsoring the legislation.

“Our members have tried to do the right thing. We know we’ve lost sales because of voluntarily implementing these procedures,” said Rosen.

Tom Urtz, vice president of Human Resources and Community Affairs for ShopRite, said the proposed law “strikes the right balance between customers’ right to choose the products they purchase and not marketing them to minors.” ShopRite had already been limiting the display of such products locally, according to Urtz.

There will be little changing at Price Chopper supermarkets, because the company has limited the display of tobacco products since 2008.

“Price Chopper is proud to have been the first supermarket in the region to voluntarily cover its tobacco displays and refrain from promoting the category,” spokeswoman Mona Golub said in a prepared statement. “We are encouraged by this legislation, … which seeks to ensure that others right here in Albany County follow suit.”

Legislator Tim Nichols, D-Latham, who spearheaded legislation to ban the sale of tobacco at retail stores with a pharmacy, criticized McCoy for being a “friend to Big Tobacco” for vetoing his legislation and offering up the compromise.

“Tobacco retailers like Shop Rite have a long established history of working hand-in-glove with the tobacco industry to block every effective tobacco control effort at every level of government that truly combats tobacco use among youth,” Nichols said in a statement. “Unfortunately, today’s announcement by Albany County Executive Dan McCoy is a perfect example of this tried and true tobacco industry tactic.”

Nichols, who worked for the American Lung Association about a decade ago, pointed to his past experience for allowing him to learn “what the tobacco industry is all about.”

McCoy during the media conference pointed to past legislation he supported banning smoking in restaurants and other establishments. He credits this law, which was later implemented statewide, with his first step towards protecting public health.

He also touted signing an executive order last year banning the use of e-cigarettes on county property. There is an ongoing debate nationally over the health effects of e-cigarettes on users, with the Food and Drug Administration issuing a proposed rule to extend the agency’s authority to regulate such products.

The tobacco display ban was developed through suggestions from supermarkets and pharmacies, according to McCoy, so the product could still be available to customers but not advertised.

“I challenge the community afterwards to go around the store and try to find smoking displays here. It is hard to find, and if you are a smoker you know where to find your product,” said McCoy “We want to do the right thing and protect people’s health, but we also want to give people the product that they want because it is a legal product.”

When vetoing the proposed tobacco ban in such stores, McCoy said legislation would have led to legal challenges. The new proposal he contends will not be challenged legally.

“This is going to be something we are not going to end up in court fighting over. This is something we can all live with,” said McCoy.

“If we … pass this proposal and we enter into a court battle with the tobacco companies, it will take lots and lots of money and lots of time. At the end of the day, it is possible we could lose,” said Nichols. “If we are sued and the county loses this, the ramifications of that sort of loss go way beyond Albany County.”

Conversely, Nichols said his proposed Tobacco-Free Pharmacies bill has survived legal challenges in other municipalities while bans on displays have faltered.

“This has never been done effectively, to anywhere in my knowledge, of banning the sale of tobacco displays,” said Nichols.

Seats for Saratoga opening up