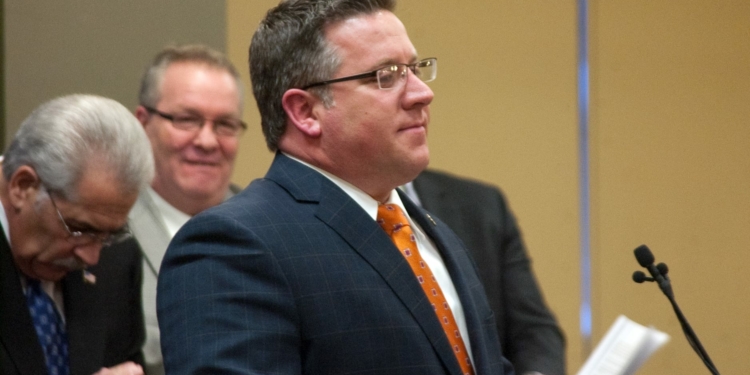 McCoy delivered his fourth State of the County address Tuesday, Feb. 17, which emphasized last year’s accomplishments and introduced new initiatives for his administration. Unlike prior years, he lauded the county nursing home for “turning a corner,” with taxpayers’ subsidy of the facility nearly halved. The now county wants to utilize unused space in its Colonie nursing home to provide primary medical care through seeking state grant funding.

“It is the hope that this new initiative will allow us to expand our on-site services to include a Primary Care Health Center,” said McCoy. Programs proposed for the center include dialysis, radiology, mental health, diabetes, podiatry, hypertension and dentistry.

The center would allow for most services to be provided on-site to nursing home residents, which reduces transportation costs to hospitals. The general public would be able to access the site, as well.

“This center has the potential to provide not only more effective quality of care to our nursing home residents but to residents countywide including (county) employees, and the utilization of this space has the further potential of actually turning our nursing home facility into a revenue generator for the county,” McCoy said.

Nursing home administrators are seeking some of the approximately $8 billion of state Delivery System Reform Incentive Program (DSRIP) funding, which seeks to reduce the amount of inpatient hospital admissions and restructure Medicaid.

“The savings we have achieved to date at the nursing home coupled with the very real possibility of this transformational project, signals very clearly that in Albany County good management and creative thinking are the order of business,” said McCoy.

This year, the nursing home is budgeting a $6.3 million operational deficit, which is down from $12 million, according to McCoy. There was $4.2 million less budgeted to operate the nursing home this year, primarily stemming from employee unions concessions.

McCoy had wanted to privatize the facility, similar to many other counties, but he comprised with county legislators to establish a local development corporation tasked with taking over the nursing home, along with hiring Larry Slatky as its new director.

The largest project, totaling $1.5 million, is modernizing resident rooms and living areas. This would include new drapes, cubicles, HVAC units, bathroom improvements and updating flooring in the units. Two-sixths of the units would be completed this year.

Another main focus of McCoy’s address was a three-part approach — Action, Awareness and Progress — to dealing with opiate addiction countywide.

“Problems with prescription drugs, heroin and other opiates are as commonplace in our suburban and rural communities as they are in our cities and require a coordinated call to action,” he said.

County officials will work with law enforcement, prosecutors, public defenders and local courts to “develop or adapt programs to divert offenders to drug education programs or to social service programs where offenders can seek appropriate treatment as an alternative to arrest or incarceration,” according to McCoy.

County departments will reach out to children in schools through developing educational pamphlets and posters, along with where to get resources for help. The county Health Department is working with BOCES and other partners to ensure education programs countywide specifically deal with opiate usage.

The Health Department will offer bi-weekly Narcan training classes to the general public. Narcan is used to save the life of overdose victims.

McCoy also proposed creating an opiate response board, which would be implementation of policies and making any necessary modifications, along with developing additional policies.

This program provides law enforcement the opportunity of giving offenders the choice — be arrested or meet with a counselor at a social service agency and avoid the court system all together,” McCoy said.

Nearly a year ago, he issued an executive order directing the county Commissioner of Health to issue a moratorium on the expansion of crude oil processing at the Port of Albany pending a public health investigation by the County Health Department. McCoy has also called for legislation imposing jail time and penalties for not reporting spills in a timely fashion.

McCoy said any processing and shipping of crude oil locally must be safe and potential impacts on air quality evaluated.

The little school that can