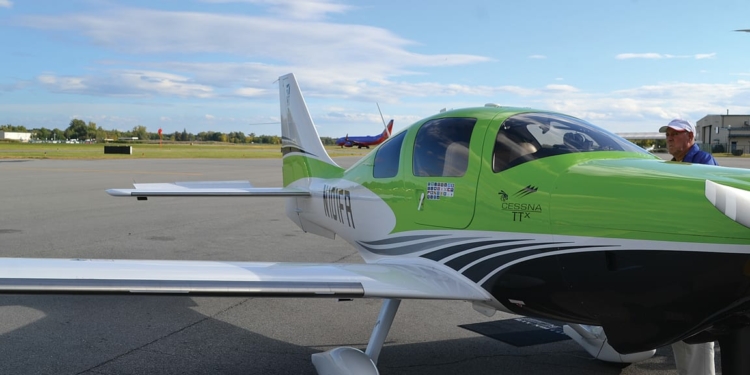 In an effort to raise awareness about the smaller municipal airports, two private pilots are flying to all the capitals in the lower 48 states and Alaska in a single-engine plane over the course of 14 days.

On Tuesday, Sept. 23, Field Morrey and Conrad Teitell flew their 2013 Cesna Corvallis TTX — the fastest single-engine, fixed-gear aircraft on the market — to its last stop of the day at the Million Air lounge at the Albany International Airport.

Morey, an FAA-certified flight instructor from Medford, Ore., and Teitell of Greenwich, Conn., an attorney with the law firm Cummings & Lockwood, arrived from Montpellier, Vt. for their last stop on this part of their tour.

“We were the only plane on the tarmac at the Tallahassee (Fla.) airport when we got in there. We couldn’t even find a port-a-potty,” said Morrey.

The trip started on Tuesday, Sept. 16, in Oregon, where Morey lives. The pilots made their first stop in Juneau, Alaska. The final stop took place Monday, Sept. 29, in Medford, Ore. after making 57 stops.

The idea of flying the Capital Air Tour came to Teitell when he wanted to “raise the bar” after he and Morey completed Teitell’s quest to fly from the highest airport in the U.S. to the lowest airport in 2013. “It was Conrad’s idea to land at every state capital in the lower 48 and Alaska,” said Morey, “but I thought we should do it all in two weeks to show just how capable and technologically-advanced a modern private airplane can be.”

A relief airport moves planes that carry fewer people and move at slower speeds away from the main airports to help traffic flow more efficiently and speeding up takeoff and landing times.

Morey owns a reliever airport in Madison, Wis., where he was born. He said the airport started as a cow pasture during the WWII and 10 years ago, he convinced the local community to buy the land to create a reliever airport. Then business sprouted up, and more travelers stopped in the area.

Albany was the 28th stop of the trip, which allowed for ample time in case of weather. Flying through the Midwest this time of year can be difficult due to tornado season. However, the pilots said the weather had been great so far.

“We’ve had super weather. The first day was up to Alaska, and the second day we had some weather involved there, but you always do in Alaska. We were worried about hurricanes, but they aren’t there,” said Morrey.

The team is working on a plan for what to do next, but they aren’t allowed to disclose any information yet.

“It’s top secret because I haven’t told my wife yet,” said Teitell. “We still have to get permission,” added Morey.

“It’s been trouble free the whole time. It really is an amazing airplane. We’re really thankful to be here at Million Air because not all the services (at other reliever airports) are anything like this. I can tell you,” said Morrey.

Million Air offers a number of services including pilot and passenger lounges, aircraft storage and tie-down, flight planning facilities and other amenities people flying into the area would need.