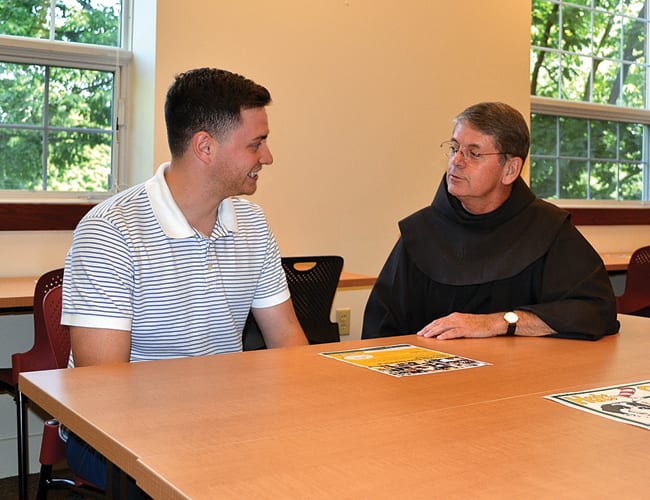 When Father Kevin Mullen was named provincial minister of Holy Name Province in New York City this spring after serving as Siena’s president for seven years, the college found itself looking for someone to fill his shoes.

In June, the board of trustees selected Brother F. Edward Coughlin, vice president for the Franciscan ministry at St. Bonaventure, as interim president.

From that point on, Coughlin wasted little time settling in to his position and becoming a familiar face on the Siena campus.

There are many changes taking place in higher education and also adjustments that need to be made for religious universities to remain successful, but Coughlin says his leadership role at St. Bonaventure has given him the experience to tackle those questions.

“I’m dealing with a lot of the same issues and concerns at another university similar in size and religious sponsorship and those kinds of things. In terms of the shifting demographics in the Northeast, numbers of students, implications of the costs of private higher education and all the talk about student loans and the importance of a liberal arts degree,” said Coughlin.

With changes in the economy and the fact that many people will change their career three to five times in their lifetime, Coughlin said a solid background in liberal arts gives students entering the workforce an ability to easily adapt to new positions.

“It’s a whole different kind of thing than what was going on 30 to 40 years ago,” said Coughlin. “We feel a liberal arts education is really a foundational knowledge and skill base, which people can adopt and use in a variety of different situations. Oftentimes, employers are not looking for an expert, they’re looking for a team player.”

Having been involved in higher education for the past 40 years Coughlin said he feels right at home on a college campus and has worked in many leadership roles at universities. He earned his bachelor’s degree at St. Bonaventure, master’s at Boston College and his doctorate at the Catholic University of America so he has spent a great deal of time as a student and appreciates the necessity of a positive learning environment.

Siena offers more than just an education, Coughlin said. The size of the college and campus creates an environment where students can develop as adults.

“Another very significant part of the Siena College experience is the residential community experience of living on campus. Our students are very much young adults, and there are some significant young adult developmental challenges that ideally go on during the college years,” said Coughlin. “Online programs and extremely large institutions are focused on you getting your degree and are not going to necessarily provide the environment and context to develop as a leader or team player.”

Coughlin said he isn’t sure if he will apply to become the official president of the college, but he is taking his time to get to know the students and doesn’t want to be a president that students can’t access. He eats in the same dining hall as the students and frequents the new café on campus.

Since he is a relatively fresh face on campus, he’s able to move more freely among the students.

Coughlin told a story about sitting recently down with students in the café, and the joy he gets from interacting with them.

“I said, ‘how’s the lunch?’ and the one guy said that it could have used some lettuce or something. So I said, ‘Why don’t you give them some feedback?’ and the student responded that people don’t care about the feedback, and they just throw it in the garbage. So I said, ‘Why don’t you write a letter to the president?’ and he said, ‘Oh yeah, he’s really going to care about me needing some lettuce on my sandwich.’ So I said, ‘You write me a letter, and I’ll reply,’” said Coughlin.