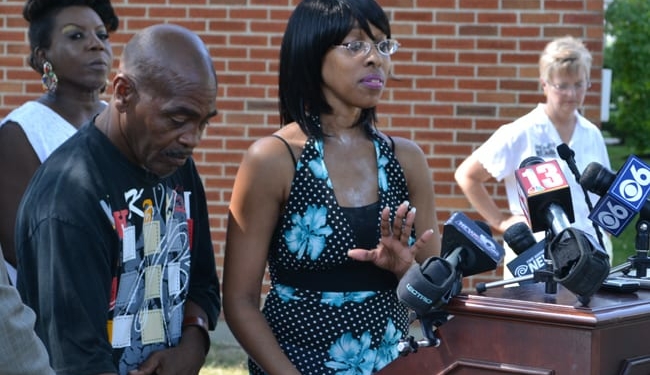 As the smell of oil permeated the air and the rumble of oil trains being jerked into motion echoed in the background, residents of public housing in Albany gathered to hear officials ask for more regulations of the transportation of volatile oil.

On Wednesday, July 23, at the Ezra Prentice homes, County Executive Dan McCoy and other officials asked to relocate the people of Ezra Prentice and called for tougher regulations on the oil trains that run through their backyard.

McCoy proposed legislation that would impose civil and criminal sanctions on railroad operators who fail to report oil spills in Albany within 30 minutes.

In June, oil spilled from a rail car vent when the car was stationary, and Global Partners did not quickly report the event. Global Partners is the company that is responsible for operating the terminal in Albany. In another event, a derailment was not reported for five hours. State law requires derailments to be reported within an hour. As a result, Global was fined $5,000.

For a company that made over $300 million in profits in the second quarter, McCoy said he doesn’t think the fine is steep enough. He wants to increase the fine to $250,000 and add the possibility of jail time for not reporting incidents.

“Right now, the legal limit is $5,000. Though it’s a lot of money to me, and it’s probably a lot to you out there, but to a company like Global that made over $340 million in profit in the first quarter alone this year, you think $5,000 means a lot to them?” said McCoy.

McCoy said monetary fines aren’t going to mean much to such a large company, but the threat of a year in jail will create more incentive to report accidents promptly.

The proximity of the Ezra Prentice Housing to the train tracks is less than 30 feet in some spots, and since it’s public housing, many of the people who live there do not have the financial means to move to a new location. McCoy is also proposing that they be relocated.

“The other sad thing about this story is we keep highlighting the area, and I’d like to see Albany Housing move these people … You can’t put a dollar amount on relocating people. Eighty percent of the people who live in these places are minorities; they don’t have a choice,” said McCoy.

McCoy suggests that the county buy the Howard Johnson’s that is for sale on Mount Hope and turn it into public housing. He said that the oil company should foot the bill to show that they would be good neighbors.

Peter Iwanowicz, chairman of the Expert Advisory Committee on Crude Oil Safety, was also at the news conference to discuss the committee’s recommendations. The recommendations range from creating disaster plans in the event of a spill or explosion to monitoring air and water pollution.

“The committee has developed some common sense steps that Albany County can implement in the short term to better understand the impacts posed by moving crude oil through our communities,” said Iwanowicz.

Given the opportunity to voice her concerns to the public, Ezra Prentice resident Deneen Carter-El, 47, said she has lived in the housing complex for 27 years and has had numerous health issues since she moved in. Doctors say the issues are unexplainable, but she thinks they are related to the trains.

“They (the doctors) said they can’t really say, but I never had any problems until I moved here … I’ve been in and out of the hospital the whole time,” said Carter-El.