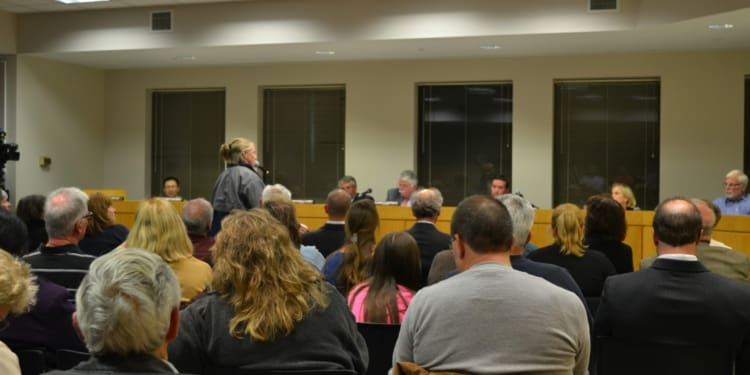 After three hours of deliberation, the Colonie Zoning Board of Appeals opted to allow attorneys for Memory Gardens and Afrim’s Sports more time to submit documents pertaining to a proposed sports complex next to the cemetery before making a final decision.

The Thursday, Nov. 21, meeting stretched long into the night and the Public Operations Center on Old Niskayuna Road was filled to capacity with some people even standing in the doorway as the zoning board heard arguments from supporters and opponents of the contentious proposal.

At the close of the hearing and following an hour and fifteen minutes of public comments, board member Michael Gary remarked, “I think this is the longest and most active meeting we’ve had in our tenure.”

Afrim’s Sports, Inc., which is owned by Afrim Nezaj, is applying to have property Nezaj hopes to purchase at 969 Watervliet Shaker Road rezoned to an amusement area. Currently it is classified commercial office, which does not currently allow for Nezaj to build a proposed sports complex that would include an 86,865-square-foot dome, four soccer fields, a 3,400-square-foot multi-use building and a parking lot with 377 parking spaces.

Victor Caponera, a lawyer representing Afrim’s Sports, said Nejaz’s intended uses for the property are already among the acceptable uses in a commercial office zone.

“If my client were just building domes, we wouldn’t be here,” Caponera said.

Caponera also argued that Nezaj should be allowed to purchase the property and develop it as a sports complex for hardship reasons since the current owner has been trying to sell the land since 2008 and its value has dropped about $3 million dollars.

“Our position is that the client cannot make a reliable return on this property,” said Caponera, who spoke for an hour and a half.

“The Town Board, not this board, the legislative board decided this (a sports complex) was a use that is appropriate only in the industrial district and the airport business area. Not in a commercial office area,” said Barber, whose brief argument was met with applause from opponents of the sports complex. “It is clear based upon the collective evidence that this application fails in all regards so I will request that motion for the application be denied.”

Eventually the crowd, which had been making a constant murmur throughout the hearing and at one point had to be restored to order, got a chance to speak.

The comments were split pretty evenly between those who wanted the soccer field and those who opposed it. The public comment period, which at times became heated and emotional, lasted more than an hour. Some people praised Nezaj, while others said they wouldn’t want to hear joyful noises while they were visiting their family members at the cemetery.

Carol Gordon, who lives two miles away from the Memory Gardens, said a sports complex would disrupt the peacefulness of the adjacent memorial park.

“To build such an unattractive structure beside Memory Gardens is offensive,” Gordon said. “The Memory Gardens is a peaceful setting for those who’ve passed and for kind people to visit. I think it is disrespectful, disgraceful, disgusting and an example of money worship.”

Troy resident Tamaura Demartino, who has a family member buried at Memory Gardens, said she doesn’t believe the proposed venue would necessarily make a bad neighbor.

“I love cemeteries. I can empathize with the families who are concerned with the integrity of their loved one’s resting place,” Demartino said. “If I were to hear, off in the distance, happy sounds of children getting exercise, this would be more happiness compounded. It makes me sad to think the sounds of children playing are a disturbance to people. My children’s grandfather rests in Memory Gardens, and I would be more inclined to see to him.”

The board has given both attorneys 60 days to submit documents while board members look into the legalities of the zoning and continue doing research. The date for the next hearing has not been set yet, but the zoning board expects to reach a decision in January 2014.

Burn off that bird