by Billy DeLap
in Government, News
0 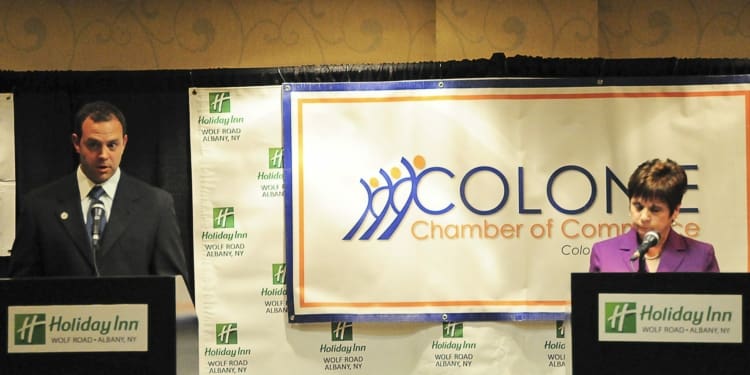 Town of Colonie Supervisor Paula Mahan focused on her track record during a recent debate against her opponent, Todd Drake. But so did her challenger.

Audience members submitted questions. One asked about their vision for the town of Colonie.

“We can’t let ourselves go down the path of fiscal irresponsibility that could land us in jeopardy. We need to feature long-term planning as our governmental process, specific long term planning. One that will avoid surprises that could result in increased taxes,” Drake said.

Mahan, however, painted a different picture.

“We have been working on our vision for the last six years. My vision was to bring the finances back to where they should be,” replied Mahan. “As far as surprises go, I got a really big surprise when I came into office and saw what the finances were. We have changed and turned the town around into a positive direction.”

When Mahan came into office, the state comptroller said the town was in financial ruins. The town was nearly $30 million in debt. Today, that debt has been erased and the town posted a $1.45 million fund balance.

Mahan created a 10-year plan shortly after entering office to try and rectify the financial situation. Earlier in his campaign, Drake questioned the legitimacy of the plan while campaigning earlier this month saying, “To be clear, a memo does not make a financial plan. Nor does a document that lacks a quantitative analysis of fiscal policy or fails to provide future projections of revenues and expenditures.”

Drake has been running on the platform that Mahan’s administration lacks transparency, and they were able to discuss that in person in the debate.

“As far as FOIL’ing we try to tell people that sometimes people ask for things when they don’t know what they’re asking for so they ask for too much,” replied Mahan. “When you ask for thousands of pages of things it costs a lot of money. We try to find a way to reduce that to find out what you are asking or what you are looking for.”

The candidates also fielded questions about the town’s infrastructure, recreational facilities and their past accomplishments.

Six vying for Town Board

Six candidates are seeking three spots on the Town Board, and they all met in a panel-style forum on Wednesday.

They answered questions from the audience that ranged from whether or not the town should create a ward representation system to how to create a greener Town of Colonie.

The candidates gave answers that generally split along party lines.

“It’s no secret I’m a very big proponent of having a ward system. I’ve had the opportunity to walk about every square inch of Colonie over the last two years, having campaigned very closely last year and coming up short. I must say the biggest complaint I have heard at all the doors is that there are forgotten parts of the town,” said Republican David Greene.

“Our town has so many diverse areas I would hate to see it dissected into sections. I believe the town needs to protect and represent all the residents,” she said.

The Town Board debate lasted just over an hour, with members from both parties. The candidates, regardless of party, said they wanted to be on the Town Board to ensure that the town is great for generations to come.