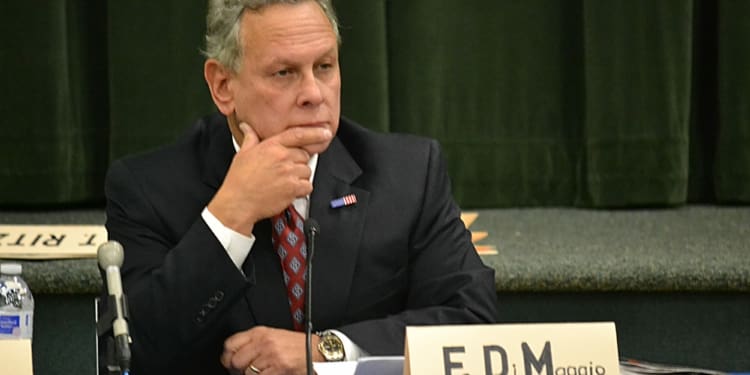 Economic development was a key point of discussion when the candidates for supervisor of the Town of Bethlehem met in debate.

On Tuesday, Oct. 22, Republican candidate for supervisor Fred DiMaggio and incumbent John Clarkson met to answer questions from an audience gathered at the event sponsored by Spotlight News, the Albany County League of Women Voters and the Capital Area Council of Churches.

DiMaggio owns Homeland Security Partners, LLC, and was appointed to the Empire State Development by former Gov. George Pataki in 2003 to lead industry development of homeland security. He is also is the former chairman of the Bethlehem Republican Committee, but stepped down from his position in order to run for office. Now, DiMaggio is the head of the multi-party coalition Bethlehem United.

On Tuesday, he painted a picture of a town where development cannot get into gear, epitomized by the Vista Technology Campus.

“What are we doing to reach out and fill the technology park with what it was intended to be filled with?” asked DiMaggio.

Clarkson argued that Vista is thriving, and although a tech company has yet to be brought to the campus, the businesses within have helped expand the town’s tax base.

Clarkson then criticized DiMaggio for his work with Empire State Development, claiming it was found to be a bad idea “that spent too much money.”

“But I won’t hold that against him,” said Clarkson, adding that patience is needed to attract big businesses.

DiMaggio said he does not feel Clarkson has made economic development a priority during his two-year term in office. He found it hard to believe the town could not find $650 to remain a member of the town’s Chamber of Commerce, and said the town should be looking to hire a full-time employee to focus on economic development.

Clarkson said making improvements to the town’s infrastructure was an important investment in enticing businesses and complemented work done by the town’s Industrial Development Agency.

The candidates diverged in other areas, as well. DiMaggio said he was concerned about the climbing tax rate, but commended Clarkson on his implementation of a multi-year spending plan. He also said numerous times how he felt a raise in taxes was unnecessary for 2014, and proposed fund balance be used for tax relief.

The supervisor said he has worked hard to cut costs and a majority of residents in Glenmont and Selkirk will see lower taxes this year because of an ambulance district consolidation. Clarkson said a small tax increase is budgeted for the next several years to cover future infrastructure costs and to maintain Bethlehem’s quality of life.

But the two took a similar stance on the Wemple Corners development project.

DiMaggio said he would totally revise the town’s Comprehensive Plan to keep similar projects from happening. Clarkson said he would not approve the plan as it stands because fixes are needed to solve traffic issues, and he wants to make sure the developer follows through with community enhancements.

Toward the end of the forum, Clarkson said he has focused on running a clean campaign, and accused DiMaggio of doing the opposite.

“I do not indulge in false arguments, or negative and cheap politics, and I must say we’ve seen a bit of that in the last couple of days,” said Clarkson, referencing mailers that were sent to residents. “You know what, I’m not worried because … I think they reflect much more poorly on the person who sent them than the person they are about.”

In a later interview, DiMaggio took responsibility in sending the mailers, but said he was not responsible for email blasts or a website attacking Clarkson.

The election is Tuesday, Nov. 5.

To watch video of the entire forum, click here.

Student steps up to the challenge