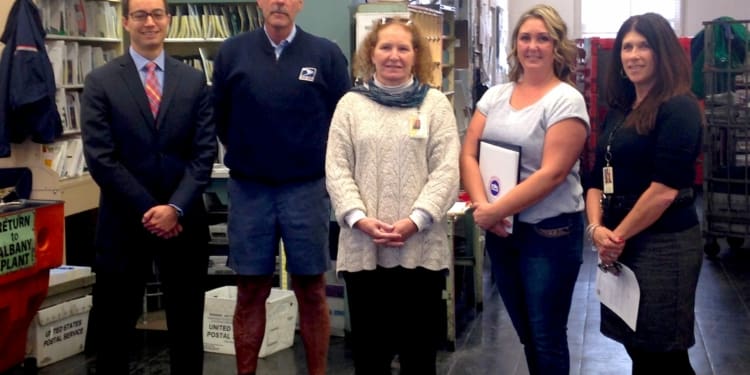 Sometimes the neighborhood mail carrier is much more than a friendly face. He or she could save your life.

Two Bethlehem letter carriers were honored last week by the United States Postal Service and National Rural Letter Carriers’ Association after coming to the rescue of two elderly residents while on their routes this summer. Bob Pytell and Diane Degonzague each helped residents with medical emergencies within the same week last July.

“We’re all very proud of them and I thought they should be recognized,” said Delmar Postmaster Geoffrey Randall.

Degonzague, who has worked at the Post Office for 11 years, said she was following her normal route one afternoon when she began to hear yells for help. She had no idea where the voice was coming from and thought one of the older residents along her route may have fallen within their home.

“I tried to look through the window but didn’t see anyone,” she said. “That’s when I heard the voice say she had fallen behind a bush.”

The older woman had fallen outside and broke her femur, Degonzague said.

“She was a real champ. I think I was more nervous than she was,” Degonzague said. “She asked if I had a cell phone, and told me to stay calm and call 911.”

Degonzague did what she was told, then she ran up the road to the woman’s son-in-law and then stayed with them both until help arrived.

Pytell faced a similar circumstance that, if it went unresolved, could have had a dire outcome.

The 28-year Post Office veteran said he was following his route when the mother of one of his customers stopped at her son’s house and said she wasn’t feeling well. Pytell said he knew she didn’t look right and she was having trouble, so he suggested they call 911.

It turned out the woman was having a heart attack that was mimicking the side effects of a stroke.

The family of the woman Pytell helped sent in a letter of thanks, which was read aloud at a short ceremony held on Thursday, Oct. 10, at the Delmar Post Office.

“I’m grateful for Bob’s quick thinking and actions because he saved my mother’s life,” the letter read. “Had Bob not stopped and recognized she was in distress, she would likely have died or suffered irreversible brain damage. Because of Bob’s quick thinking my mother is alive and well today.”

Pytell said it was nice to be recognized, but that’s not why he stopped to help. Degonzague said receiving an award “was weird.”

“It’s nothing anyone else wouldn’t do,” said Pytell. “I was just in the right place at the right time.”

The National Rural Letter Carriers’ Association presented the pair with Rural Carrier Hero Certificates and the U.S. Postal Service awarded both with Certificates of Appreciation. Pytell and Degonzague were both nominated for the awards by Randall.

Randall said it was nice to know his employees took the time and care enough about their customers to help when needed.

“It was nice that good came out of the situation,” he said.

Celebrate fall at the Pruyn House