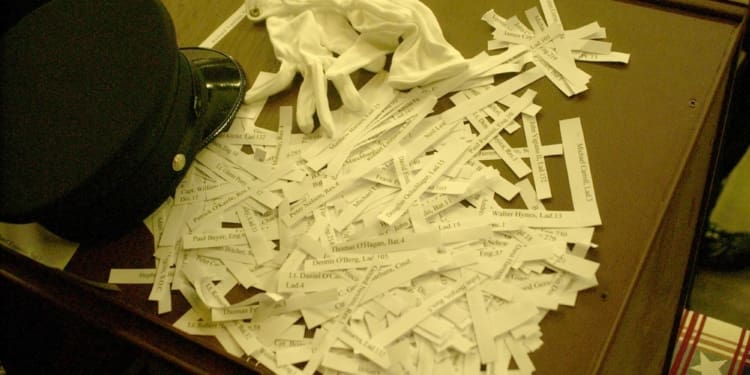 Members of the Selkirk Fire Department were joined by members of the Elsmere and Delmar fire departments in a ceremony on the evening of Sept. 11, 2013, to honor the lives lost in the terrorist attacks of 9/11. The names of the 343 firefighters that perished were read by the firefighters and members of the public.

This was the third year the department has held the ceremony. It is meant as a way not only to remember fallen brothers, said Selkirk Fire District Chief Bill Asprion, but also to pay respect to the 2,977 victims of the terrorist attacks.

`Those firefighters that we lost fought to the end,` Asprion said. `Part of the reason we’re here is to help them rest in peace.`

The reading took approximately an hour, including opening and closing statements. Daniel Silvernail, 10, also played the bagpipes to both open and close the ceremony. The event was held inside the vehicle bay of Selkirk Fire Station No. 2 in Glenmont, which shielded the attendees from stormy weather outside.

The ceremony was briefly interrupted at around 7:30 p.m. when a call came in for downed wires. Selkirk firefighters shed their dress uniforms and jumped into gear before pulling away in an engine. They returned about 20 minutes later.