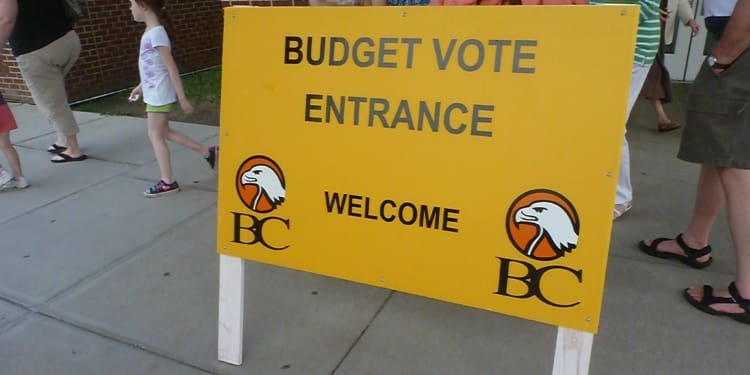 In a year that did not see a challenge to the state tax cap or any major spending reductions, Bethlehem residents passed the district’s $90.4 million spending plan for the 2013-14 school year by a wide margin.

“I hope this year is an indication that we’ve all really rolled up our sleeves and tried to preserve the excellence in education that is know for Bethlehem Central,” said BC Superintendent Tom Douglas. “This is really about the community’s decision and the community overwhelmingly supported this decision that was worked on over the past 10 weeks.”

At the end of April, members of the Bethlehem school board made last-minute adjustments to the budget. About $221,000 worth of expenses were shifted into this year’s budget instead, after District Business Officer Judi Kehoe said BC is expecting to finish the 2012-13 year with a surplus.

The board transferred funds from equipment and supply purchases to retain a $100,000 capital improvement project, keep freshman sports and keep one full-time-equivalent hall monitor position and a 0.2 FTE health instructor position in the budget.

“I think we made the right decision,” said School Board President Diane Giacone Stever. “This is the first year in a number of years where we didn’t have to cut anything from educational programming for the kids.”

Many residents said they found it easy to vote in favor of the budget because of the changes that were made. Turnout was down from last year, when more than 6,500 residents voted, but the district was also challenging the state tax cap then.

“The increase pinched, but it does every year,” said Deborah Vogel, 62. “Without a challenge to the tax cap and no positions being cut, it wasn’t that big of a consideration. I voted in favor.”

Others felt the budget was “responsible” and that the process was “open and fair.”

Voters also approved a bus proposition to purchase six large replacement buses at a price not to exceed $639,000. The state will reimburse about a third of the cost. The proposition passed 2,088 to 1,701.

In the race to fill two empty school board seats, incumbents Diane Giacone Stever won with 2,144 votes, along with Michael Cooper, who had 1,914 votes. Christine Beck of Selkirk came in third with 1,844 votes.

Douglas commended the school board and the Bethlehem community on the outcome of the vote.

“We have to be mindful that this board of education has been doing some of the most difficult decisions over the past several years to the point that they’ve reduced more than $10 million of resources to try to maintain a great educational system,” he said. “I think this year they we’re trying to hold off giving disappointing news to a community that expects so much of their educational system.”

Voters in the Ravena-Coeymans-Selkirk Central School District also approved a 2013-14 school year budget today by a margin of 1,665 votes to 622 votes.

Nearly 73 percent of voters approved of the $41.2 spending plan, which carries a 2 percent increase to the property tax levy. However, the plan decreased spending by about $486,400.

“The district sought to develop a budget for the 2013-14 school year that would balance our responsibility to sustain our educational mission with fiscal responsibility, and an appreciation for the needs of our taxpayers in difficult economic times,” said Interim Superintendent Alan McCartney in a statement.

This spending plan will result in the loss of 4.5 FTE teaching and staff positions. There were also five voluntary retirements. Some course sections were consolidated and the number of electives offered to students was reduced.

Voters also approved the purchase of two small buses with cameras, four mini vans and two suburban vehicles at a cost not to exceed $80,000. In the Board of Education election, Jason Hyslop, Patrick Brown and James Latter were all elected to three-year terms.

“Thank you to all who took the opportunity to voice their choice about the fiscal decisions and elected leadership of RCS schools,` said McCartney in a statement.