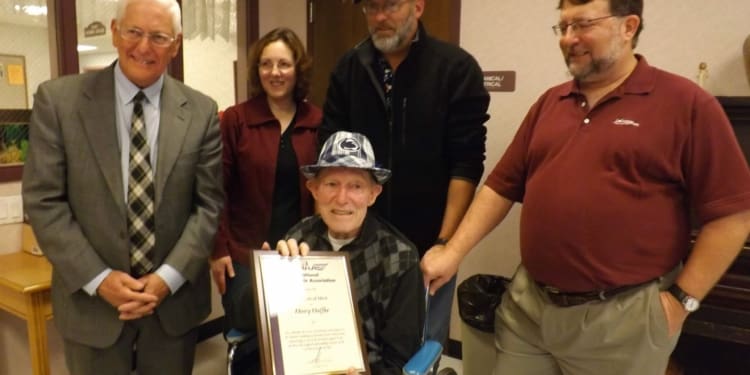 While they may have dimmed over the years, looking into the eyes of Henry Haffke still reveals the youthful sparkle of a man who once raced with the wind.

Haffke lived a life of adventure few can begin to imagine. A lover of all things aeronautical from an early age, he got his pilot’s license at just 15 and from then on, he never looked back.

The longtime Malta resident was honored on Wednesday, Jan. 30, with a Certificate of Merit from the National Aeronautic Association for his years of designing, researching and writing about model aircraft, in particular the Gee Bee, of which he is considered the world’s foremost authority.

“What a magnificent and full life you have lived,” said Sausville as he presented the award.

Haffke fell in love with aviation while living in Chicopee Falls in Massachusetts, less than a mile from the Springfield Airport. His father would take him and a brother there on summer evenings to watch the planes fly.

“This was cheap entertainment when we couldn’t afford the 10 cents it cost to see a movie,” Haffke said.

That cheap entertainment turned into a lifetime obsession. Haffke started building model airplanes when he was 6 or 7 years old.

“They weren’t very pretty and didn’t fly at all,” he said with a chuckle.

But he soon got skilled at building them and the store he bought his models from offered him free models to build for display in the store window.

He joined the Navy near the end of World War II and helped with training in the ordinance school. It was during this time he became interested in flying engine-powered Free Flight and Control Line scale models.

Once out of the service, Haffke continued to build more and more detailed flying model airplanes. But perhaps his greatest achievements happened after he became involved with the Granville Brothers, who invented the famous Gee Bee aircrafts.

Although it was considered dangerous by many because of the radical design, which included a tear-drop shape, stubby wings and side-by-side seating, the diminutive Gee Bee planes were responsible for several air speed records, including the world speed record of more than 500 mph set by Jimmy Doolittle in 1936.

That model, the R-1, “flew faster than anyone had ever flown before,” said Haffke.

“They were way ahead of their time,” he said of the Granville Brothers.

Because the design was so radical for the time, experts said the plane was dangerous, but Haffke set out to prove them wrong. He spent five years researching the plane and even met pilots that had supposedly been killed flying the Gee Bees. The result of the research was a book, “Gee Bee — The Real Story of the Granville Brothers and their Marvelous Airplanes.”

The other result was a determination to build a scale model of the Gee Bee that could actually fly. In spite of all his accolades, Haffke said the most exciting time of his life was the first time he actually flew a Gee Bee model in competition at the Old Rhinebeck Aerodome in the early 1970s.

Haffke said no one had ever seen a model Gee Bee fly before and the event was even sweeter because of the presence of one of the Granville brothers, Bob, with whom he had become good friends.

“No one had seen a Gee Bee model fly and they were amazed that it flew,” said Haffke. “It was so much fun because everyone was amazed that it actually flew.”

Not only did it fly, but it had won top placements in three of the four events. Haffke said the Gee Bee model reached a top speed of 80 mph, faster than a lot of cars at the time.

When asked how many models he had built over his lifetime, Haffke put the number north of 100.

Besides the book, Haffke has written for a variety of model aircraft builders, and according to his son, Ray, people today are building real Gee Bee airplanes based on his model designs. He is listed in the Smithsonian as the world’s foremost authority on Gee Bees.