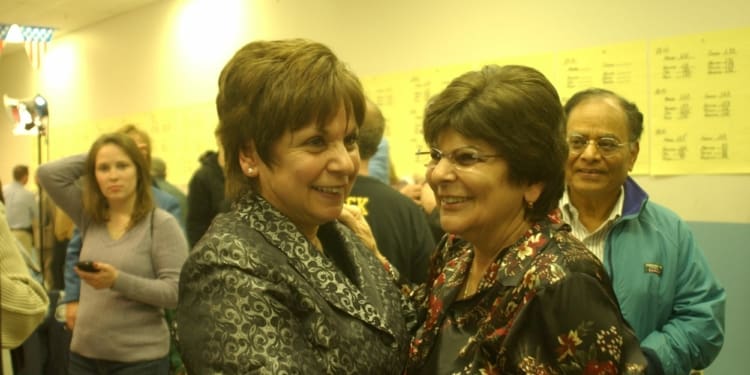 Colonie Supervisor Paula Mahan might be declaring victory but the race for supervisor is not over yet.

In down-to-the-wire race that continues on, the night of Tuesday, Nov. 8, ended with the Albany County Board of Elections reporting Mahan leading her opponent with 10,966 votes to 10,670 votes, a mere 296-vote margin.

Sheehan said it was too early to call the race as she noted there are still around 1,000 absentee ballots yet to be counted. She said that there is still a chance for her to win and said that nothing is official until all the votes have been counted.

“You watch it but it doesn’t really matter until it’s done,” Sheehan said. “It’s like this ED [Election District] and that ED, it doesn’t really matter until it’s all counted. The fact that we’re this close even after all of that, it’s only fair to make sure we get every absentee. So many people did absentees this year and I think their voices should count.”

According to Rachel Bledi, Republican commissioner for the Albany County Board of Elections, a total of 1,238 absentee ballots went out and 944 had been returned on Election Day. Democrats returned 287, with 394 still out, and Republicans returned 398, with 494 still out. Bledi added that there are also 302 ballots still out for those not affiliated with a party with 228 already returned.

Absentee ballot canvassing is scheduled for Wednesday, Nov. 16 at 9 a.m., the day after the ballots are due back to the board (they must be postmarked no later than Election Day).

Ballots from members of the military are given another week to come in. There are 22 absentee ballots out to service members, with 11 already returned.

“They have until the [November] 21st,” Bledi said. “They have extra time. They aren’t counted unless we’re talking about a situation where we count all the other absentee ballots and it’s down to a difference of one or two votes.”

Mahan did not waiver when she said she was claiming a victory even with the absentee ballots yet to be counted. She is confident after seeing the number of absentee ballots still out that the race will continue to stay in her favor.

She said she was happy to see the race over. Earlier in the day, Mahan called the race one of the dirtiest she’d ever been involved in and she only reinforced that at the end of the night by saying there was “a target on my back from day one.”

“I’m just happy the people of Colonie saw through the misinformation,” Mahan said.

In the contest for three open Town Board seats, Colonie Democrats pulled in victories, with Nancy Hernandez, William E. Carl and Paul Rosano, all Dems, amassing the most votes.

Republican candidate for Town Board Peter Molinaro said he’d be sticking it out until the absentees are counted, as well. The fourth-place finisher garnered 9,798 votes to Rosano’s 10,125, a margin of 327 votes.

“It’s an uphill battle but it’s worth fighting for all of the people that supported us,” Molinaro said. “I don’t want to let them down. So, we’ll fight it until every vote is counted.”

Rosano said he had mixed feelings about leaving his position on the town’s Planning Board and said he is basically shifting over to the legislative side.

“I’m so engrossed in the Planning Board, because that’s what adds to the tax base in this town and that’s what’s going to put the jobs in this town,” Rosano said. “I’m going to miss that, certainly. I’ll move on to the next piece.”

“That’s something we’ll have to maintain and make sure we’re be able to use our resources,” Mahan said. “That means monitoring and managing the town’s finances closely so we don’t come into that problem again.”

Mahan also plans to continue to look into restructuring and consolidating various areas in the town to help save taxpayers’ dollars.

“I’m looking forward to working with everybody and go on and continue with the progress with made to date,” Mahan said.