The physics of flying squash 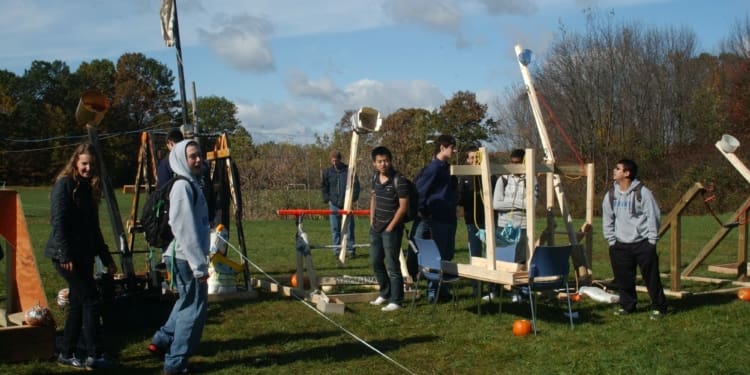 Shaker High School students get to learn about projectile motion in very unique way: by building a device to launch a pumpkin into the air and as far as it can go.

Science teachers Christine Nolett and Pamela Rossi partnered together four years ago to facilitate this project. They felt it would be a fun to apply what the students learn in physics classes to the real world instead of just learning from a textbook.

The students were put into groups and not given any instructions on what particular device they should build to launch the pumpkins. Rossi said they were told to build whatever they wanted. The students had to find all of their own materials to build a device, though many of them had never even used a power tool.

“We tried to convince them to use scrap things around the house and come up and be as creative as they can with spending as little money as they can, preferably,” Rossi said. “But we don’t give them anything. We give them a pumpkin weight, though, of about four-and-a-half pounds. It can be more.”

The activity teaches students how to work as a team and not only think for themselves, Nolett said. For the physics portion of the competition, the students must calculate the maximum height the pumpkin achieved, the initial velocity as it left the launcher and the angle that it launched from.

“We measure out the length it went and we time the amount of time in the air,” Nolett said. “With those two things they are able to find out all of their initial velocities and maximum heights.”

Rossi said the groups are also tasked with creating model drawings of what their launcher will look like from the top, front and side views. Then the students have to write an essay on how they constructed their launcher and how their project turned out.

There are three different kinds of launchers that are built for the competition: catapults, slingshots and trebuchets. Last year, a student launched a pumpkin from the starting point, which was a grassy field directly behind the school, over a fence and hit the football goalpost.

“A trebuchet, if it’s built right, goes much further, but it is a very difficult launcher to build and requires a lot of counterweight,” Rossi said. “So there are some limitations from that, which can prevent a kid from building a trebuchet.”

Groups were awarded points for decorating their pumpkin. Many of the students decked their pumpkins out with spiders and spider webs and one was dedicated to breast cancer awareness month. Nolett said the minimum distance a pumpkin must travel is five meters forward, or the team is penalized. If a group goes over 15 meters, they get bonus points.

The students launched their pumpkins on Friday, Oct. 28, and Monday, Oct. 31.

Principal Richard Murphy said the school takes a lot of pride in the physics program and wants to make science more relatable and interesting to kids. He said when both Nolett and Rossi came up with idea for the pumpkin launch the school was right on board.

“It just made all the sense in the world because it is an academic problem and kids are graded on it like everything else,” he said. “Learning doesn’t have to just have to happen in the classroom. It’s a nice timely event with the season and I hope it inspires kids to take physics a little more seriously as a possible career… It’s great for kids to see concepts of physics incorporated out here.”

Colonie candidates to face off in debate

Editorial: Your vote is your voice