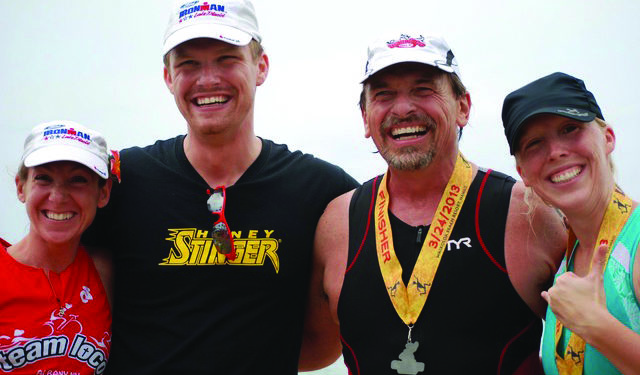 This is the second in a two-part series.

There is no tension in the man who employs and enjoys both extended sabbaths and triathlons.

In fact, Tim Madden’s commitment to both the physical and spiritual may end up being a generational marathon as his children and grandchildren are literally following fast in his footsteps.

When he was 60, the founder of Matchless Stove & Chimney says God “carried him” through his Ironman competition – a 2.4-mile swim, a 112-mile bicycle ride and a 26.22-mile marathon.

Perhaps one of the unexpected benefits of being a grandfather-triathlete is the inspiration it is providing for his progeny.

“I had a bunch of grandkids in the living room and asked them, ‘Who’d like to learn to swim laps?’” Madden said. “They liked the idea, and so I trained them to swim laps.

“Then I said to one, ‘Would you like to ride with me this summer?’ Lo and behold, I had a group of them riding with me. Next, their parents came to me and said, ‘They’re really excited about doing a triathlon with you.’ I told them we needed to create a team. We are called ‘On Eagle’s Wings.’ One of them is designing the logo of the gear we will wear, and we are all training as much as we can with COVID.”

With six children and 24 grandchildren, Madden feels that the gold medal of grandparenting occurs when the youngsters talk about some random subjects that surprise, delight and even concern him. He simply takes all of these things to prayer.

“My hero growing up was my grandfather,” Madden notes. “He taught me things like rewiring a lamp and how to start over if I had to. That’s an important life lesson.”

Physical training provides Madden with a body that allows him to grandfather with “street cred,” work at Matchless Stove & Chimney and think clearly.

“When we engage in activity,” he said, “the body releases growth hormones that help injured parts of the body and endorphins that help the brain.”

That intense part of his life is complemented and juxtaposed with rest and spiritual sabbaths.

“Instead of a cup of tea to keep me in the zone,” he said, “I might take a 20-minute nap. I get 8 hours of rest every night and take natural sleep aids. While we are sleeping, we are healing.”

Madden’s mission work with his wife, Wanda, has taken him to six countries. As a result of their tireless work, he has also used sabbaticals for extended rest every seven years and has found them to ground him in God.

He ironically gets his direction for life and particularly his senior years from the biblical invitation and warning in The Book of Isaiah: “Only in returning to me and waiting for me will you be saved; in quietness and confidence is your strength; but you’ll have none of this.”

Tim Madden is having all of this.

ON THE BOOKSHELF: Page turners with a twist (adult)