VETERAN NEXT DOOR: Doing, done and thank you 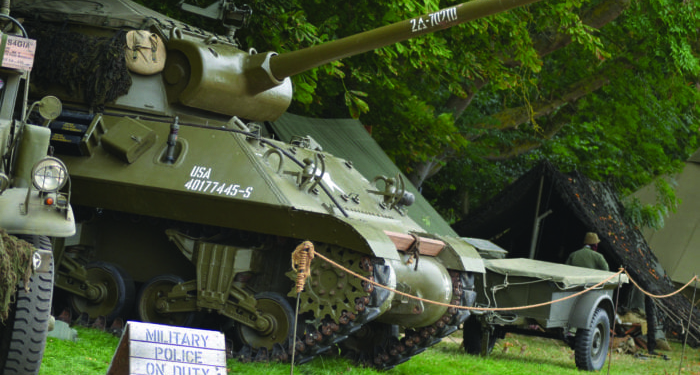 Next month on Veterans Day we are reminded and so thankful to honor Veterans in parades and other activities. Have you ever thought how the Veterans think about the things the Patriots do for them today?

In August 2018 for the third time, three Veterans have driven to Conneaut, Ohio to witness the largest military reenactment in the country. A little town about 65 east of Cleveland and a seven-hour drive from Albany is the site of a D-Day Reenactment. On Saturday the D-Day Invasion from Lake Erie is viewed by some 35,000 people and with over 2,000 reenactors. We travel on Wednesday, see the encampments on Thursday, Friday brings some battles and a display of tanks and airplane shows. On Saturday the big invasion at 3 p.m. is an event to remember. The 2018 event year was the 20th time and it improves every year. The D-Day organization will celebrate 2019 for the 75th anniversary of D-Day, June 6, 1944.

Driving there with three Veterans, Allan Atwell, (Army Battle of the Bulge), Charlie Lesvesque (Navy, Battle of Okinowa) and Frank Nati (Army, Korean War Combat zone) enlightened me with the deep appreciation to those who do things for them. Sharing some 15 hours driving to and from Conneaut in Frank Nati’s car, I developed a different twist on their feelings.

The three Veterans realized soon I did not drive slowly even though it was not my car. I asked them to come up with an excuse if I was stopped for speeding. The obvious response from the three Veterans was “need to get to the next rest stop”. We suspected the troopers have heard that many many times. We needed some thing that the trooper would remember and find unique. So I ask each one of them their age. Frank was the babe at 86, Charlie at 92 and Allan at 93. I told them if I was stopped I would test the trooper’s patriotism and humor. I would say to the trooper ‘look I have two WW II Veterans and a Korea War Veteran ages 86 to 93’. They told me I could drive between 86 and 93. I said if the trooper did not show his patriotism or his humorous side, I’d take my chance with the judge. I guess God was on my side as God was for theirs years ago. I did not get stopped.

The three meet some of the same people year after year. Sheryl Zandstra Family with three beautiful USO reenactors placed deep red kisses upon their cheeks and that made some very memorial photos. Charlie taught Sunday school for over 45 years. He meets Sally who taught Sunday school for 40 years. We were all impressed with young 11 year old Jack. who was amazed to meet Veterans at the event vent and stayed in the same motel with them. Tracy at the information booth offered very impressive help, Jenna was a USO college student eager to learn about the folks from days gone by. John and Sandy led the French Resistance encampment since 2003. John and Debbie, German reenactors tried to make Allan feel at ease, as he told me later “some memories never die”. All the volunteer golf cart drivers were so friendly and ‘Sweet Jude’ Judy proved that point. Seeing all the workers at the registration tables, Linda, Richard, Donna, Christine all doing for the Veterans was captivating. They interacted with the Veterans of WW II, Korea and Vietnam Wars and made them feel it was military registration time again but with friendly faces.

As the four day trip ends, the three Veterans were amazed at how an event of this magnitude is undertaken for so many years. They thank you deeply volunteers for what your are doing for them today as we, the Patriots thank you Veterans for what you have done for us. God Bless All who spend time at the Conneaut Reenactment (ddayohio.us) or any other activity to appreciate our courageous people.

ORGANIZE SENIOR MOVES: The autumn of our lives