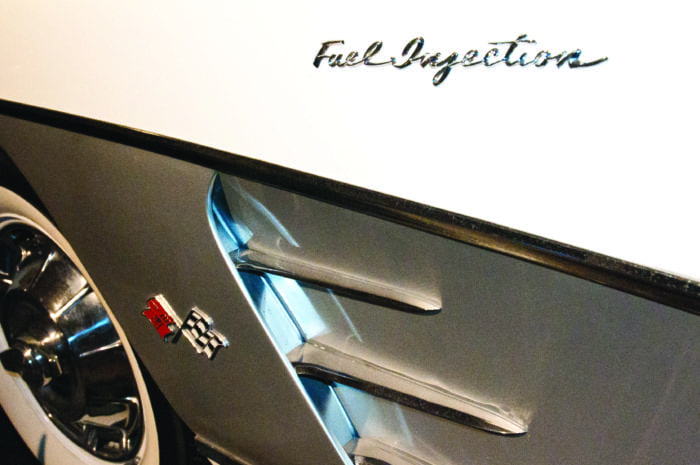 [dropcap color=”#888″ type=”square”]C[/dropcap]arly Conners never knows what to expect before driving up to work each day. One morning, she said, the rolled into work to see the Batmobile in front of her building. Such a surprise is not uncommon for the Saratoga Automobile Museum’s executive director.

“I have the best job in the world,” Conners said. She was named to the museum’s post last November. Her second-floor office still has that new car smell. After more than 15 years of working in college admissions, this chair best suits her. Her father passed on his love for cars. When introducing her husband to her father, she said he immediately became a “favorite son.” He owns a auto dealership. This is a family trade.

There are more than 263 million registered cars in the United States. Nearly 85

percent of people drive a car to work. Those numbers suggest that nearly everyone has the shared experience of driving one. It’s a bond that welds us all together.

Conners admits to having a love affair with fast Europeans — Audi and Porsche, to be specific. “I have a new love with a little Aston Martin,” she said. “So, that’s kind of fun, right now.” It’s not at all scandalous. The people who walk through the museum’s doors understand the passion behind her feelings with such cars. She said everyone has a story to share. People remember the first car they drove, or the one they trusted to bring home their first born. When she speaks of her favorite cars, she’s attracted to “safety” and “speed.”

“In upstate New York, you can drive around fast in the summer, but get out of any snow storm in the winter,” she said.

Conners and her staff are preparing for an exciting auction that involves nearly 50 cars from the personal collection of the late Dennis Dammerman. Dammerman, who was a former vice chairman of General Electric, resided in Saratoga Springs, with his wife Marsha. He loved cars, and he loved the museum. All 44 vehicles, ranging from a 1936 Ford Street Rod to a 2013 Chevrolet Corvette 427 Convertible, will be auctioned off on Friday and Saturday, Sept. 21 and 22, at the Saratoga Performing Arts Center.

The collection, comprised largely of a variety of mid-century domestic convertibles, coupes, and sports cars, is the largest single consignment in the auction’s history. All vehicles will be offered at no reserve.

Dammerman was not only a car collector and enthusiast, but a trustee, supporter, and advocate for the museum. In 2009, Dammerman displayed 16 of his vehicles in an exhibit entitled, “Mid Century Marvels.” Now with this generous consignment, the Dammerman Collection sale at the Saratoga Auto Auction will help support the museum’s educational programming, including its Distracted Driving Safety Program.

Dammerman was 38 when Jack Welch named him GE’s chief financial officer in 1984, the youngest CFO in company history. He held the position until 1998, when he became Vice Chairman and Executive Officer of GE and Chairman of GE Capital Services, Inc. The same year, CFO Magazine honored Dammerman with its first Life Achievement Award for CFO Excellence.

Dammerman remained active in business after retiring from GE, serving on the boards of directors of BlackRock, Inc., one of the largest publicly traded investment management firms in the U.S.; Swiss Reinsurance Company Ltd.; Capmark Financial Group Inc.; and Discover Financial Services. He also served on the boards of various entities associated with his summer hometown of Saratoga Springs, including the New York Racing Association, Skidmore College, and Adirondack Trust.

In addition to his service on numerous boards, Dammerman spent his retirement years indulging his passion for horses and automobiles, both classic and contemporary. Following his retirement, he and his wife, Marsha, made their primary home in Wellington, Fla., where Dammerman was a founding partner of Wellington Equestrian Partners, which developed the Winter Equestrian Festival into the largest and longest-running event in the sport. He enjoyed watching his wife compete in the Winter Equestrian Festival and throughout the Northeast.

“The addition of the Dammerman Collection to the auction will undoubtedly help support the museum’s array of educational programming,” said Connors. “We cannot express enough gratitude toward Mrs. Dammerman for her trust and support of the auction and the museum.”

The Dammerman collection, comprised largely of a variety of mid-century domestic convertibles, coupes, and sports cars, is the largest single consignment in the auction’s history. All 44 vehicles will be offered at no reserve in this month’s auction at the Saratoga Performing Arts Center.