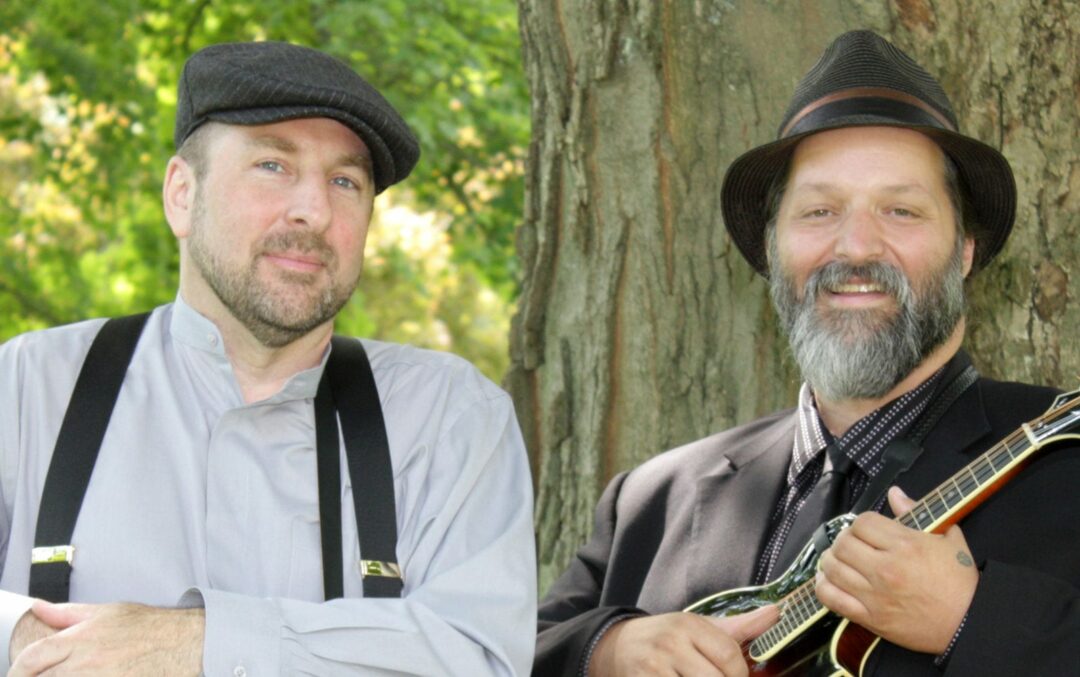 Tom Lindsay, left, and Michael Eck make up the musical duo that is Lost Radio Rounders. Photo by D. Lockrow.

What’s the ideal audience for any musician? An attentive one, an engaged one, of course. There’s nothing quite like performing for a thoughtful group of folks who get the jokes, listen to the stories, sing along, and smile nostalgically when they hear a familiar melody.

That’s the audience we find when we play for seniors. If you had told us when we were 21, playing loud and late in rock and roll bar bands, that one day we’d not only be spending afternoons and evenings at senior residences, historical societies and libraries, but loving it, we might have laughed. Now, we know, as an acoustic duo offering themed programs of historic American music, that we’ve truly found our home.

We are Lost Radio Rounders, Tom Lindsay and Michael Eck, and we’ve spent the last decade bringing the songs and stories of our land to seniors across the Capital District, from places like the Troy Music Hall and Caffè Lena, to wonderful communities like Kingsway Village, Daughters of Sarah, the Homes of the Good Shepherd and Beechwood at Eddy Memorial.

Tom sings and strums guitar; I add flourishes of mandolin, banjo, ukulele and more, depending on the day.

As Tom explains, “Many of the tunes we present—in shows like In The Days of Stephen Foster, Campfire Songs and Sing-alongs, and The Home of the Brave: Songs of Soldiers and Sailors—are not really from the youth of today’s seniors, but from their grandparent’s childhood, ones they would have heard their grandmother croon; titles from old 78s that grandpa had. It’s the American musical DNA we are trying to preserve.”

As a result of performing these songs—“Streets of Laredo,” “My Old Kentucky Home,” “The Midnight Special”—we’ve met so many interesting people.

Katie, from Coburg Village, responded to our Carl Sandburg’s American Songbag show by bringing in a photo the famous poet, Lincoln biographer and music collector had signed for her father, the great folklorist Harold Thompson. Tom, a Thompson acolyte was stunned. I was moved by discussing Katie’s childhood, a time spent sitting on Lead Belly’s knee and chatting with Woody Guthrie. Talk about American history in song!

Angelo, from Meadows at Glenwyck, once brought down an antique banjo mandolin and asked me to play it for him. He wanted to hear it sing once more. A true honor.

And, just recently, at Loudonville Assisted Living, Eva told us of hearing Paul Robeson at a fateful concert in Peekskill in 1949.

These experiences enrich us as much as we hope our songs enrich our audience.

Tom works hard to find context for the music. We want to entertain, always, but we do love to educate a little, too, especially at libraries and historical societies, where we always find a thrilling interplay with other interested parties.

“Sometimes an audience can be awakened to an old song with just a sentence or two of explanation,” he says. “Michael and I, for example, love the early twentieth century number ‘Ain’t No More Cane on the Brazos.’ Those seven words sound like English, but will mean little to folks in 2018 until they’re informed that we’re singing about convict labor in the sugar cane fields along the Brazos River, in Texas, in the early 1900s. Just a few key pieces of information can make a piece come alive.”

No matter where we travel, from Grant Cottage to the award-winning Albert Wisner Public Library, we are always reminded of just what a powerful force music can be. Tears, from sweet memories, gather at the edge of an eye; hands clasp, gently reaffirming a long romance; mouths open spontaneously and sing, the lyrics leaping up from some sweet storehouse in the heart.

We do what we do as professionals—arriving on time, well prepared, well dressed and ready to work—but even we can’t help but be moved by what happens when spirits join in service of a song, be it a cowboy ballad, a classic spiritual or a robust sea chantey.

As noted, our journey has brought us to a fantastic place. Gosh, we’re nearly seniors ourselves. At this time, we can’t imagine a better, more rewarding gig than playing for friends like Katie, Angelo and Eva. Sing along!

To learn more about the Lost Radio Rounders, visit its website at www.lostradiorounders.com.