The birth of a school district 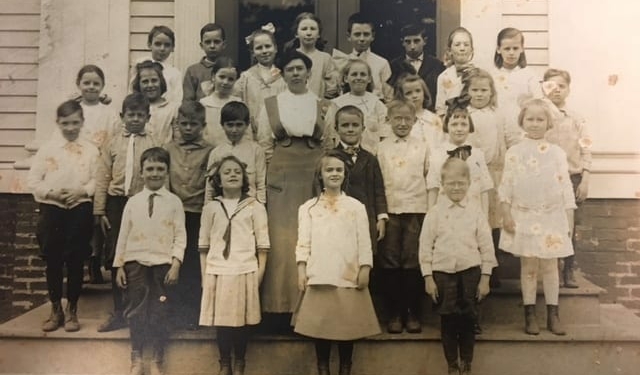 DELMAR — The first 13 seniors graduated from the Bethlehem public school system in 1929. Prior to that, students in the Town of Bethlehem were forced to commute to the City of Albany if they wanted to attend high school.

Beth Anderson, a Bethlehem graduate who taught English at the high school for 25 years, has recently undertaken a project to document the history of Bethlehem Central School District from those earliest years — and she’s asking the community for help filling in the considerable gaps.

According to Anderson, who is a self-professed lover of American history and mystery novels, local students would have to commute by train — on the same tracks that now underlie the Albany County Helderberg-Hudson Rail Trail — to attend secondary school in the City of Albany because Bethlehem did not have its own high school until 1925. In 1925, Bethlehem declared itself a “union-free” district, which allowed it to establish the first class of high school freshmen, 13 of which went on to graduate four years later from Delmar High School (currently Town Hall).

Explaining that there were 15 small “common schools” operating in Bethlehem by 1915, Anderson said, “Yet there wasn’t anything for secondary education. That amazed me and so I started looking into it.”

The Cedar Hill Schoolhouse, now home to the Bethlehem Historical Association, was among those first 15 state-sanctioned schools. It is also where Anderson, almost a century later, was inspired to begin cataloguing the history of the district. She was doing some writing for the BHA newsletter, she said, “which allowed me to dig more into the town stuff and I noticed there wasn’t really anything out there about the school district. I mean, there’s little bits and pieces. . .

“No one has ever written an overarching thing on the whole school district and I thought, ‘I could do that!’ And, I wanted to do it.”

District schools that were built since the 1950s — such as Hamagrael, Glenmont and the high school — have much more historical information available, said Anderson, and are less problematic. “I’m trying to dig and find the early stuff as well,” she said.

To that end, Anderson has been attempting to locate and interview anyone who was involved with the district in its earliest years. “I’m trying to find the oldest people around who still remember,” she said. Thus far, she said she’s “had some really great interviews,” but feels she’s found more questions than answers.

For instance, she said, she discovered there was an experimental secondary school for just one year, 1917-1918, following the passage of a bill called the Township School Act — a copy of which Anderson has yet to find — which allowed the town to establish a specialized high school that taught an agricultural curriculum to male students and domestic arts to females. “It says in this [Altamont Enterprise] article that it was established in the Wright House on Kenwood Avenue,” she said. “But there was a general practitioner doctor out here named Thomas Holmes who volunteered at the age of 35 to go to serve in World War I, and I read an article that said his house was used since he wasn’t there and he was a widower.”

The Township School Act was repealed that very winter, said Anderson, who came across another article about the auction of items from the discontinued school. Hoping to find any extant school board minutes that may have been kept by the district after it officially incorporated in 1930, she went to go see BCSD Superintendent Jody Monroe, who suggested she visit the basement of the current middle school, formerly the high school. “So I talked to Dave Doemel, the interim principal there, and we went down into the creepy basement and, actually, one of the cool things down there was I saw the metal door that was original fallout shelter door — which, honestly, wouldn’t have protected anybody.”

While poking around the basement of the middle school, Anderson found a box marked 1904-1925. “It was like, ‘ding!’,” she said. “And so I pored through these handwritten school board notes in old ledgers in varying degrees of penmanship.” Ultimately, she was still unable to learn more about the short-lived school because the clerk that year neglected to take minutes. Anderson said she did come across 1919 documents recommending the removal of the same clerk for that very reason. “Because he was not taking the minutes,” she said rolling her eyes in mild frustration. “That didn’t help.”

Pointing out that the high school had a Greek fraternity/sorority culture that was still in existence when she was a student there, Anderson said she has been unable to learn much about its origins either. An old schoolmate agreed to let her photograph his high school Phi Delta Phi jacket, but a plea to her graduating class yielded no other responses.

She did speak with a married couple, both of whom graduated from Bethlehem in the ‘50s. She said she learned some interesting things about the Greek culture at that time and even got to look at communications between the wife and her sorority. For sororities, she said, “it was less of a party function than it was sort of a service thing. The fraternities, not so much — they shot darts and, if they could get beer, they drank it.

“There’s part of me that wants to represent that,” she said, “but I’m not having a lot of luck finding things.”

(Some of the earliest high school fraternities in the country, in fact, began in New York in the 1800s, such as Alpha Zeta, which came into existence at the Union Classical Institute in nearby Schenectady — which was associated with Union College, home of the college fraternity movement — in December 1869.)

In speaking with long-time district faculty members, one thing that has stood out to Anderson is the way the community has changed over 90 years, as evidenced by the way teachers were once hired. “One fellow who taught with the district for more than 30 years was hired on the District Superintendent’s screen porch,” she said. “He wasn’t even from here.” After being directed to Bethlehem by a woman a teachers’ organization in Albany, the former educator found himself directed to the superintendent’s home, where, after a drink, he was asked when he could start.

“That just fascinated me,” said Anderson, “because now it’s so competitive.” She said that she has spoken with four former teachers who were hired in similar ways. Now, she noted, teachers aren’t hired without the approval of a committee composed of both administrators and educators. “And it’s all done online now; back when I was hired, there was still a lot of paperwork.”

In less than a century, BCSD has become one of the top-performing districts in the region, state and nation. Twice in the last three years, it has been ranked first among 84 school districts in the 11-county Capital District region, and sixth in all of upstate New York, based on five categories: language and reading; social studies; science; math; and a category that measures graduation rates and outcomes by calculating the percentage of graduates who plan to attend college and the percentage of students who graduated with advanced Regents diplomas. (Last year, BCSD dropped to second place in the Albany Business Review rankings, trailing Niskayuna by less than half a point.)

If Anderson sees any room for improvement within the district today, she said that she would really like to see more curriculum opportunities for students who may not be bound for college. In a culture that produces so much academic success, she pointed out, students with talents that may not be as academic in nature may experience depression and lower self-worth without other subjects in which they might learn and excel.

That being said, however, Anderson noted that she has long been aware of the district’s academic prestige, which she considers well-earned, and specifically commends its efforts to keep up with the latest advancements in teaching and technology. “It’s not easy,” she said, “but it’s important.”

Anderson is hoping to connect with individuals who may have family members who remember the district’s earliest years or those who have memorabilia from older family members that were educated in Bethlehem. “I love digging and researching and finding,” she said. “And people need to understand what’s behind what they have.

“Don’t let the history be lost,” urged Anderson. “We need to know what the foundation is and what we came from. I’d love any information, stories, old photos, any little ephemera or old programs. Any little thing that represents how it was in the early days of the district.”

“In this wonderful age of technology, where we can capture words and images and save them,” said Anderson. “I think it’s important.”