VETERAN NEXT DOOR: TGIV, The Spotlight and 73 years later 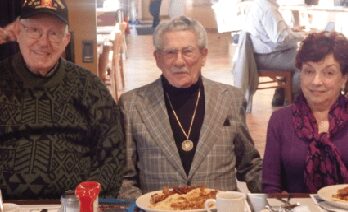 When three people collide in time and experience the results are rewarding.  This story involves the writer of the column, Frank, two World War II Veterans and a memory 73 years ago.

Charlie Lesvesque enlisted in the Navy in August 1944.  His mother signed him up at 17 and off he went to war.  He left the farm on Wolf Road and headed to Sampson Naval Training Station on the east side of Lake Seneca for basic training. The basic training lasted six weeks and he was eventually assigned to the U.S.S. Teton.  His was a member of the gunnery crew and later a deck hand.  His specific duty on the gunnery crew was that to receive the 40 mm shells from the shute and pass it along to others on the crew.

“I worked the shute but did not shoot,” he said.

Lesvesque had a harrowing experience on the way to Iwo Jima when he and the crew ran into a typhoon.  As a flagship, they were as he described it, “a communication ship to all the others.”

A flagship is where the admiral of the fleet is located.  We were always near the action, but mainly served the fleet as communications to others, said Lesvesque.  So important that Charile’s best moment was when the Teton was next to the U.S.S. Missouri when the Japanese signed its surrender.

Lesvesque’s service during World War II could be as common as thousands on his ship.  Although his story was common to many a sailor, he stood six-feet tall, and with a smile just as wide.  After the war, he returned to his family’s Wolf Road farm, and later worked in a steel factory.

Fast forward 73 years and Lesvesque is a Friday regular at “TGIV Fridays” at the Gateway Diner.  He’s a popular traveler of the many events with the veterans from TGIV.

Lesvesque spent three days last August in Conneaut, OH with 11 other veterans and Patriots.  He witnessed a reenactment of D-Day and the Normandy Invasion. His daughter Tammy told me all his life he was known as Dick or Richard (his middle name).  TGIV only knew him as Charles from his Patriot Flight application. Now, he goes by Charlie. Even Tammy now calls him Charlie.

Now, fast forward to Feb. 2, 2017. I received a call from another 90 year old sailor named Sid Gettleman.  He was in basic training in 1944 as well.  He read ‘Traveling Veterans –TV’ from last month’s edition of the Senior Spotlight and recognized Lesvesque’s name.

“He is the only one I remember from my six weeks of basic training,” said Gettleman.  He described Lesvesque as a big guy. (“I was small, about 5 foot 7 inches.  I am Jewish and was called little Jew boy,” said Gettleman. Lesvesque would always then tell the guys to knock it off and they did.”)

I told Sid this is the Lesvesque that you remember but I will not give you his phone number nor will I tell you where he lives.  You need to come to TGIV and surprise him.  I could tell the excitement in his voice.

Gettleman had stayed stateside, training sailors in survival techniques.  Lesvesque went off to Rhode Island and they never met again.  Gettleman eventually became a construction carpenter, foreman, superintendent and project manager with a remarkable experience of  building  Macy’s Colonie Center.  They may have taken Lesvesque’s farm in the process.

Gettleman and Ann Rexford are known in the area as excellent ball room dancers.  They attend the Colonie Elks frequently on Thursday evenings, as well as other venues.

Gettleman and Lesvesque served our country well. They  did their duty. Sacrificed their youth. Now they were rewarded with an indelible friendship. They fulfilled what many veterans hope to do: meet up with a buddy long lost from their service.

Thank you for your support.  This article is something special to the Veterans and me.

The story is to be continued in a book or booklet in the future.

North Colonie School Board opts for the $106.3 million Option B