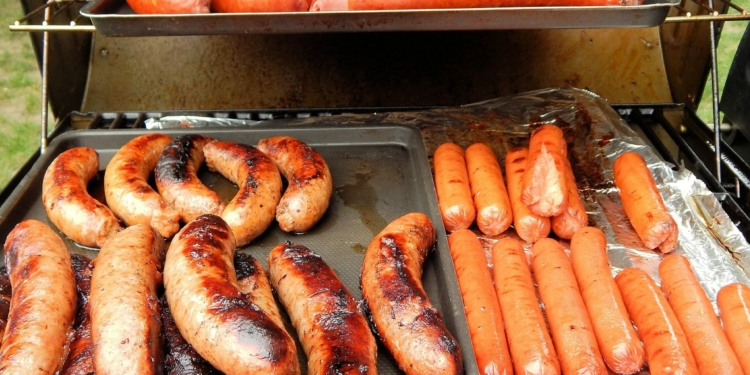 Memorial Day may be the unofficial kickoff to grilling season, but things don’t really heat up until July when balmy evenings beckon families and friends outside to cook and enjoy their meals al fresco.

Everyone seems to have their own opinion about grilling techniques and tools, but most will agree that cooking food over an open flame produces unique flavors that simply can’t be replicated.

Sure, you can always just throw your burger on a grill over some flaming briquettes, but the following grilling techniques can help bring out those flavors in different ways.

Smoking: Smoking is a technique that is growing in popularity, as products such as the Big Green Egg inspire more people to smoke their foods. It involves cooking foods in closed chambers at low temperatures. Smoking is not the quickest way to whip up a meal – ever heard the phrase “low and slow?” – but it will give your dish a rich, smoky flavor. You can smoke all kinds of proteins, and even cheese, tofu or vegetables will get a flavor boost from this technique.

Spit roasting: Also known as rotisserie grilling, spit roasting may call to mind pig roasts in which food placed in a chamber with a rotating, often motorized spit. Indirect heat is used to cook the foods placed on the spit or skewer, and spit roasting is often a go-to method for cooking whole birds or ribs. The bigger the setup, the more mouths you can feed at once.

Indirect grilling: When employing this technique to grill foods, cooks will not place their foods over a direct heat source, such as an open flame. Instead, the foods are placed in a chamber away from the heat source before the lid is closed. The lid will remain closed while the food cooks, which can take a long time. Some people prefer indirect grilling because it tends to produce foods that are well-cooked on the inside but do not have the charred exterior that foods grilled by other means may have.

Plank grilling: Popular among people who like to grill fish, plank grilling involves putting food on top of a plank of wood and then placing the plank over a direct heat source. In addition to the flavor imparted to the food from the heat source, such as charcoal, the plank itself can add its own unique flavor. Though fish is perhaps the food most widely associated with plank grilling, this technique is also a great way to grill vegetables.

Got the basics down? Then take your backyard barbecue to the next level with some of these tried and true tips.

Add some wood. Wood is often used to add some extra flavor when smoking foods, but it also can add flavor when grilling in a more traditional way. Wood chips can be soaked in water or even wine or beer so they don’t burn so quickly. Wood chunks or logs will burn slower than chips, so there’s no need to soak them. Wood imparts a unique flavor to grilled foods, making meals even more delicious.

Apply a dry rub to the food. Dry rubs are made from dry ingredients like herbs and spices. Dry rubs don’t penetrate the meat too deeply, which means they don’t need much time to add flavor. That’s ideal for people who decide to grill at the last minute and want to add flavor even if they don’t have the time to marinate their meat. If you’re looking to cut sodium, you can make a salt-free rub with chili powder, garlic powder, paprika and other spices for a healthier alternative.Bring meat to room temperature prior to putting it on the grill. Meat that goes directly from the refrigerator to the grill is likely to cook unevenly, which can affect the overall flavor of the meal. This issue is easily overcome by taking the meat out of the fridge about 20 to 30 minutes before putting it on the grill. Doing so lets the meat reach room temperature and increases the likelihood it will cook evenly.

Grill more vegetables. Grilled vegetables, whether they’re part of kebabs or simply grilled alongside the main course, add significant flavor and provide all the health benefits of veggies cooked in more traditional ways. Coating vegetables in a healthy oil like olive oil makes it easy to grill them directly over an open flame without sticking.

Season your vegetables, too. Meat and other proteins might garner the bulk of the grilling attention, but vegetables are worthy additions to any grill grate. Grilled vegetables can be made even more flavorful with some light seasoning with a little kosher salt and/or black pepper before placing them on the grill. As the vegetables cook, they will absorb the salt, which adds to their flavor profile. Dried herbs also can be used to season grilled vegetables for even more flavor.

Mojito Fish SteaksMakes 4 servings4 firm-fleshed fish steaks, such as salmon, swordfish, kingfish, or sable, each 6 to 8 ounces, about 3/4-inch thick2 tablespoons olive oil, plus more for brushingSea salt and freshly ground black pepperFor the Mojito Mop:3 tablespoons light rumJuice and finely grated zest of one large lime1 tablespoon canola oil1 teaspoon hot-pepper sauce1 tablespoon sugar4 tablespoons chopped fresh mint leavesLight a grill for indirect low heat, about 200 F. If using a charcoal grill, build a small charcoal fire at one end of the grill. If using a gas grill, set a burner at one end of the grill to medium-low. Put the grill grate on the grill and clean the grill grate with a wire brush.

Coat the fish steaks with 2 tablespoons olive oil and season with salt and pepper. Set aside for 5 minutes.

Meanwhile, make the mop: In a small bowl, stir together the rum, lime juice, canola oil, hot-pepper sauce, sugar and 3 tablespoons of the mint leaves.

Brush the grill grate with olive oil. Put the fish on the grill away from the heat, spoon 1 tablespoon of the mop over each fish steak, cover the grill, and cook until the fish steaks flake to gentle pressure, about 1 hour, basting with mop about every 5 minutes.

Serve each fish steak scattered with the remaining chopped mint and the lime zest.

Put the bacon in the skillet. Close the lid and cook for 1 to 2 minutes or until browned and crispy around the edges. Transfer to a plate.

Add the mushrooms to the skillet. Close the lid and cook, stirring once, for 7 to 9 minutes or until browned. Transfer to a plate. Season with salt and pepper.

Meanwhile, in a large bowl, season the beef with pepper and 4 teaspoons of salt. Using your hands, mix until just incorporated; form into four 1-inch-thick patties with a slight dimple in the center.

Put the burgers on the grate. Close the lid and cook, flipping halfway through, for 8 to 10 minutes total for medium, or until an instant-read thermometer inserted into the center registers 135 F. (If using store-bought ground beef, always cook it to 160 F, or well done.) In the last minute of cooking, top the patties with the cheese to melt and place the rolls cut-side down on the grate to toast.

Put the egg in the bowl of a small food processor. Blend until beaten.

With the machine running, slowly stream in the oil through the feed tube until emulsified (the mixture thickens).

Blend in the garlic and salt.

Transfer to an airtight container, refrigerate, and use within 5 days. From “The Essential Kamado Grill Cookbook” (Rockridge Press) by Will Budiaman.