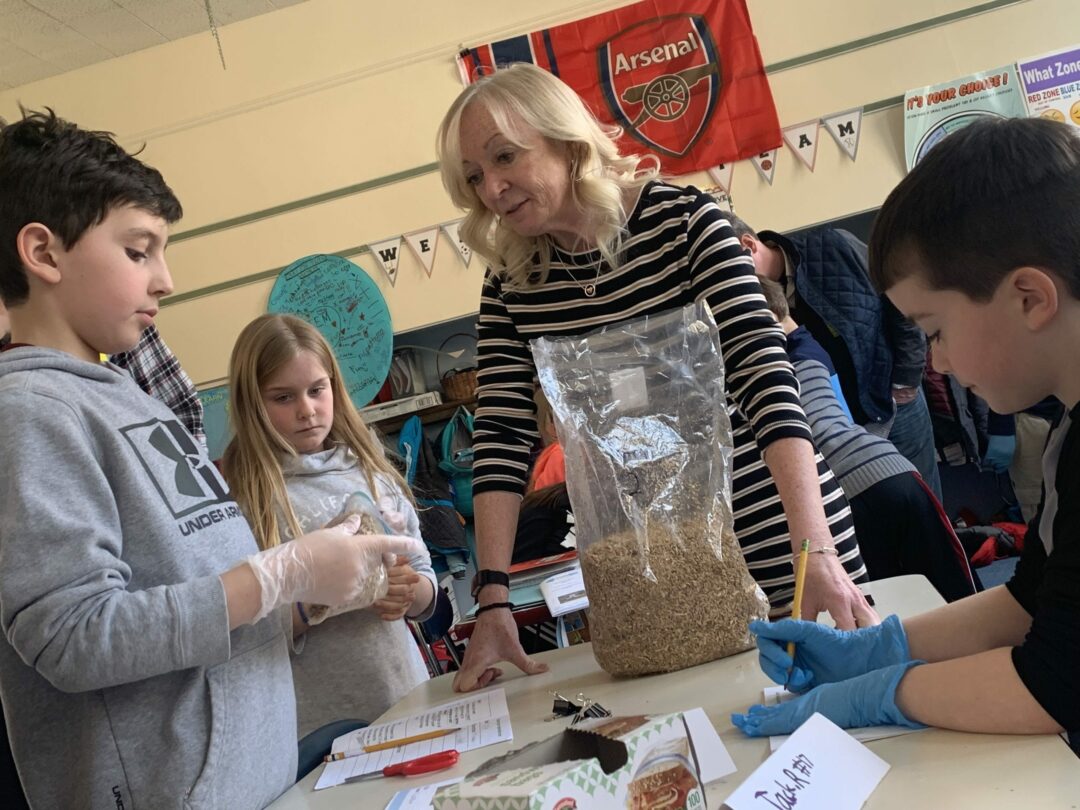 Last month, Paradis was challenging her students, split up into six teams of four, to make firm desk organizers by growing mycelium — the vegetative part of a fungus — from a hemp substrate to showcase how this sustainable process can yield everyday materials. But before letting them grab their plastic hemp-filled bags, bowls, teaspoons, tablespoons, flour and other utensils to start the process, she had them seated at their desks, awaiting instruction while a dozen volunteering parents stood by to help.

After getting the go-ahead, the students gathered in their teams to get the materials they needed. Their excitement palpable, even as some struggled to put on their safety gloves, trying to work in their petite fingers.

“I know you all want to blow these gloves up and play with them, but I’m going to ask you to treat them like you’re going into the operating room,” Paradis told the class. “Treat them with the utmost respect, and when you slip your hands in, keep them in.”

The accelerated-sounding content and instruction for third graders stemmed from how Paradis was teaching the Mushroom Maestros module, created by locally owned CreositySpace, a company aiming to integrate STEM (science, technology, engineering and math) teaching tools into K-5 curriculum across the country. CreositySpace modules, like this one, are currently used in over a dozen states and are “aligned with Common Core (ELA and Math), New York State and Next Generation Science Standards,” according to the company’s website.

Paradis said she joined forces with CreositySpace because their modules are very hands-on and engage both students and parents.

“It’s great for teaching them how to solve real-world problems, and improve their communication, teamwork, collaboration skills,” she said. “They also take turns being leaders, and kids are very inquisitive about the world.”

CreositySpace was created by co-founders Katherine Geramita and Peg Zokowski in 2013 after the latter’s then third-grade son demonstrated interest in 2011 about starting up a kids’ energy club for his class. He also had imagined complex ideas at a young age, such as wanting to create brain signal-controlled prosthetic limbs for military personnel or using pineapple enzymes to kill cancer cells.

Zokowski, who has a background in Ukrainian history and writing, said that while CreositySpace partially aims to spark interest in young elementary school students about STEM, it also works to incorporate STEM concepts into non-traditional STEM topics like art, literature and humanities. In addition, CreositySpace introduces young students to contemporary entrepreneurs and innovators within the science and technology industries — the company would collaborate with interested entrepreneurs/innovators first who can help create modules and appear in live video chats during the classroom instruction — to help inspire them.

The combination of many classroom-engaging modules and entrepreneurs led to Zokowski calling CreositySpace a “three-dimensional, phenomena-based approach” to learning.

“Back to when my son was in third grade at Hamagrael Elementary, he just had so many ideas and wanted to invent and start a kids’ energy club,” she said. “I knew some energy entrepreneurs personally so I brought them into his class throughout his school year, and they talked to his class and answered questions and conducted various hands-on activities. That helped shape CreositySpace as it would become.”

In a phone interview, Geramita said that while her educational background was in engineering and science, she wants CreositySpace to establish a STEM foundation for young kids so that they’re more likely to pursue STEM-related careers in the future.

“Elementary school years are that critical age where kids start their elementary experience with very few pre-conceptual experiences,” she said. “They’d end their elementary school time with rigid self-identities, so if you want to make sure that identity includes topics like science, engineering and innovation, you need to create an environment that supports that, and that’s where CreositySpace can come in.”

She said students have begun sharing their curiosity about STEM concepts to their parents after learning about them in a CreositySpace module in their class.

This was a sentiment echoed by some of the volunteer parents at Paradis’ third-grade class.

“Honestly, this is the first year where my daughter has come home and told me what she’s learning about, and that’s fabulous,” said Marcia Russeau. “For me, when I was in school, science was always a scary subject, but this is now very hands-on and it’s a new, different way of learning, which is great.”

Fellow parent Tyler Gough said that he wishes there was even more STEM classroom instruction throughout the elementary school.

He was impressed at how the Mushroom Maestros module fused math and science concepts, requiring the kids to learn how to measure water and flour, while learning that the mycelium can grow to be used as desk organizers.

“It really helps kids to think and get curious both in class and at home, as well as work together well in teams,” he said.

Deb Zoller, another parent, said that if she had this type of classroom instruction when she was in school, it might have made her more interested in STEM overall.

“What I see here is that they’ve made STEM seem more fun by keeping them engaged and working together,” she said.

Paradis said that while school curriculum is important, the extra step is seeing children engaging with their parents or friends outside of the classroom about what they’ve learned.

“And if they can’t wait to learn more once they come back in school, that’s what I would like to see as a teacher. It has rejuvenated the way we can teach in our classroom, too, and I’ve never seen my kids so excited about learning how the world works before,” she said.

Her points appeared valid as she walked around her classroom, answering questions from her inquisitive students and helping with some instructions, while the volunteer parents continued supervising and helping out if needed.

It became evident that mycelium and the students’ capacity for knowledge were both growing that day.

COLONIE LIBRARY: Jazz at the library