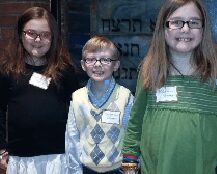 The Steuer triplets are growing up in a time where women and girls enjoy more equality with men than at any other time in history, but there are still some barriers left to break.

Chances are you either are a woman, know a woman or are related to one. I am a woman, know lots of women, and I am related to some very strong women. I am also raising two girls. Today’s political climate is coloring the way women see the world around them and how the world sees them.

My family had hoped to see another barrier broken this year with the election of a female president. Unfortunately, Harlan and I are now answering daily questions from Olivia, Rebecca and Benjamin about the current White House occupant and his attitude toward women.

There are women who speak out, women who challenge authority and women who lead. Laurel Thatcher Ulrich is quoted as saying, “Well-behaved women rarely make history,” and she is so right.

Women have been voting for less than a century. My kids could not believe that women had to fight so hard for the right to do something men could do. In 1919, the 19th Amendment to the United States Constitution was ratified, making women eligible to vote in the 1920 presidential election for Warren G. Harding or James M. Cox. New York allowed women the right to vote in 1917.

Olivia and Rebecca are stunned to learn the freedoms they have might not have been allowed when my mom was a kid. A discussion about one very simple item of clothing – a skirt –  sparked hours of conversation. Today the girls can wear jeans, leggings and skirts without a thought. When I went to school, the dress code was the same. However, when my mom went to the same high school, girls were not allowed to wear slacks. They could only wear skirts or dresses. Olivia and Rebecca were dumbfounded! Small victories built up during my mother’s time are now forgotten or overlooked by today’s girls.

Our last presidential election was historic. Hillary Rodham Clinton stepped into the fight to be the 45th president of the United States of America with her pantsuits and sensible shoes made for blazing a trail. I sat back and watched in awe. And I saw her attacked for her clothing choices, hairstyle – anything her opponents thought they could get away with was fair game. I sat my family down and said, “Watch. This is history!” My kids think nothing of a woman running for president because for them women can do anything.

Harlan and I take our kids with us when we vote for school budgets, presidents, governors and in primary elections. Each time we vote, we tell them that voting is a privilege and that it is our duty to vote whenever possible.

Susan B. Anthony was arrested for trying to vote in the 1872 presidential election. She fought for many causes that are still so important to women 145 years later. Ms. Anthony owned her own home, was not married, and held a job. There are lots of women today who do this and no one thinks twice. In 2017, walking to a voting station is easy. There is no visible threat of violence. There is camaraderie with the people taking our name and signature. I am allowed to step in to a voting booth. I am allowed to cast my ballot.

Feminism is not a dirty word. Ruth Bader Ginsberg is the second female United States Supreme Court justice and one of the three female justices in the (presently) eight-person panel. She was married and had two children when, in 1993, she was sworn in to the Supreme Court. During a recent interview, Ms. Ginsberg said that she believed women could, in fact, “have it all” (career, spouse, family) just maybe not all at once. She felt she had been able to have all that she wanted in her life. Harlan and Benjamin are feminists. Equality for women does not mean less for men; it means we have a shot at the same things.

National Women’s History Month needs to be honored for all the women who fought to make our country the amazing place it is today. My children are growing up in a time when women can marry as they please, vote, own property and live in an almost equal country. We almost had a female president. We were so close! Let’s continue to blaze a trail with America’s daughters!

Jennifer Steuer is an Albany mom whose busy household includes her husband, Harlan, and 9-year-old triplets Olivia, Benjamin and Rebecca. Follow her on Instagram: jennifersteuer.